While researching the settlement practices in lawsuits stemming from public companies’ mergers, Sean Griffith came to believe these cases were being settled unjustly. Too often, when shareholders filed suit over their company’s acquisition, the resolution of the suit left them worse off while enriching only the attorneys involved.

So Griffith, the TJ Maloney Chair in Business Law at Fordham Law School, decided to do something about it.

Griffith became a shareholder himself. Last year, he began buying shares in companies announcing mergers and acquisitions so he’d be able to contest any bad settlements that arise, and now holds shares in 40-odd firms undergoing mergers. He has also involved his students in analyzing the transactions and evaluating any settlements, and the students will have a hand in crafting the legal arguments used in his objections. 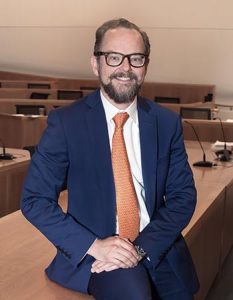 “From my perspective, the system is broken, and the way in which it is broken is that everyone gets something good except the shareholder class,” said Griffith, director of the Fordham Corporate Law Center.

In a company’s acquisition, it’s a common occurrence for some shareholders to assert that the price is unfair, the process was unfair, or the information released about the proposed deal was faulty.

But the shareholders’ attorneys “almost always” settle for extra information, and the information they get rarely reveals anything of value, Griffith said. In return, they give up the right to file any other suit relating to the facts underlying the merger, granting a type of release from further litigation that’s so broad it’s been dubbed “intergalactic.”

Sometimes they get valuable information, like a faulty valuation or a substantial conflict of interest. But Griffith doubts that this is the norm; he noted that nearly all merger deals are challenged in court these days, up from just 25 or 30 percent a decade ago.

“These are transactions where the most expensive lawyers in the world are hired to advise,” he said. “How could it be that the boards of directors of these companies are making mistakes 95 to 98 percent of the time?”

Even when shareholders get nothing but worthless additional disclosures, the attorneys on both sides often collect millions of dollars in fees—costs shareholders ultimately pay, he said.

Judges are the ultimate gatekeepers of the settlement process, but may not have the information they need to fulfill this role, he said.

“The adversarial process is the way in which our legal system gets relevant information in front of decision makers, but in the settlement process former adversaries join hands to persuade the judge to accept the settlement,” he said. “There’s nobody in the courtroom with an incentive to explain what’s wrong with the deal, why the settlement should not be approved, and why fees should not be awarded.”

Seeing the objection process as a teaching opportunity, Griffith has structured his mergers and acquisitions class around litigation and settlement practices. “It’s an opportunity for the students to not only learn the law but also to have some exposure to practice in the area,” said Griffith. It is also in keeping with the law school’s push toward experiential learning.

Griffith testified in support of an objector last year in the case of Gordon vs. Verizon Communications, in which a New York judge threw out a settlement and $2 million in plaintiff’s attorney’s fees.

He recently objected in another case involving Riverbed Technologies, Inc., and worked with his fellow Fordham law professors in July to help hone the arguments his attorney ultimately presented at the settlement hearing. His efforts have attracted media coverage including a recent piece in the Wall Street Journal.

By objecting, Griffith hopes to persuade more judges to protect shareholders by throwing out bad settlements, cutting lawyers’ fees, or carving out a more limited release, one that would not prevent all future lawsuits. If enough judges do this, he hopes, plaintiffs’ lawyers will learn to drop their cases once they learn there’s nothing wrong with a deal, rather than holding onto them for an easy settlement.

As it is, “there’s a structural problem” because instead of working on contingency, attorneys have learned they can “collect a fee every time” regardless of whether they return any value to shareholders , he said.

“In my view, there’s no problem with this form of litigation. In fact, it’s an appropriate and necessary check on the way that boards of directors conduct themselves in connection with these transactions,” he said. “And I’m not criticizing anybody for caring about their fees. At the end of the day, you have to make mortgage payments and you have to send your children to college, and stuff like that.”

“But the source of your mortgage payment shouldn’t be shareholders of companies whose boards of directors have done nothing wrong,” he said.