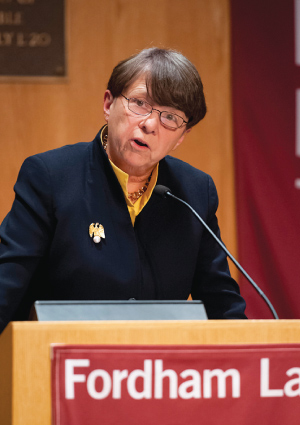 Mary Jo White, chair of the SEC, said Congress should avoid being “prescriptive” in enacting legislation aimed at the agency.
Photo by Dana Maxson

In less than an hour, White described an agency with global reach that mirrors the ever-evolving markets it regulates. While dealing with fresh issues ranging from “flash trading” to “dark pools” and other high-speed phenomena, the SEC must also implement new rules put forth by the Dodd-Frank Act, the 2010 law that overhauled the nation’s financial regulatory system—all while remaining fiercely independent and nonpartisan, she said.

In her talk, “The Importance of Independence,” White noted that the very law that the SEC is now charged with implementing almost stripped the agency of its regulatory power to protect investors of mutual funds when, in 2008, many in Congress wanted to create a new agency. White cited then-Chairman Mary Schapiro’s steadfast fight to keep the regulatory power under the agency’s “blanket of expertise”—despite pushback from the Obama administration—as a clear example of the agency’s independence.

Now three years since Dodd-Frank became law, the agency’s role in carrying out that law is firmly established. White listed a series of historic precedents that predated Schapiro’s 2009 stance, including several by the lecture’s namesake, Al Sommer. Sommer was sworn in as SEC commissioner shortly after the Watergate scandal tainted the agency as being too cozy with the Nixon Administration. White said Sommer quickly reestablished the SEC’s reputation as the most staunchly independent federal agency.

Nevertheless, one audience member questioned the agency’s independence as it relates to the “revolving door” between the SEC and private industry, a reference to the chair’s own background in the private sector.  White, however, said working in private practice made her a better U.S. attorney for the Southern District—a position she held for 19 years—and a better SEC chair.

“Being in private practice, you really learn about the respect and leverage that the SEC has. I don’t think the SEC folks who haven’t been in the private sector realize just how much leverage they have.”

Now, as chair, White said that she is acutely aware of the power the SEC has to impose criminal liability on private companies. She noted that certain Dodd-Frank rules passed by Congress invoking the commission’s mandatory disclosure powers are more directed at exerting societal pressure on companies, rather than requiring them to disclose financial information to inform investment decisions.

White said that such intent—whether to improve safety conditions of mines in the Congo, or environmental concerns—may be laudable to her as a private citizen but do not have a place in the SEC.

White maintained that while disclosure remains key to regulating securities, too much disclosure can lead to “information overload” that makes it difficult for investors to make decisions.

“To safeguard the benefits of this ‘signature mandate,’ the SEC needs to maintain the ability to exercise its own independent judgment and expertise when deciding whether and how best to impose new disclosure requirements,” she said.

The SEC’s unique expertise makes it best suited to determine disclosure rules consistent with the federal securities laws, said White.  She expressed concern that recent directives from Congress “have been quite prescriptive, essentially leaving no room for the SEC to exercise its independent expertise and judgment in deciding whether or not to make the specified mandated disclosures.”

Nevertheless, White said she recognized that when Congress and the president enact a statute mandating such a rule, she can’t say no. Instead, the commission must write the rules in a way that faithfully carries out Congress’ mandate.

White discussed how the courts review the SEC’s enforcement settlements requiring admissions of defendants’ wrongdoing even when a settlement is reached. She said she was the first U.S. attorney to require admissions as part of a deferred prosecution agreement with a corporation. Likewise, at the SEC she said admissions are appropriate.

“In some cases involving particularly egregious conduct or widespread harm to investors, for example, a heightened level of public accountability in the form of admissions may be called for if we are to send a sufficiently strong message of deterrence,” she said.