For inmates at Rikers Island, life is less of a prison and more of a hell. Former detainees compare their arrival at the facility to entering the belly of a beast, where fear and violence reign. A new inmate’s greatest hope for survival depends on his ability to secure a weapon within his first day, to prove that he can demonstrate more rage than his fellow inmates, and to conform to the life of a mere animal.

Seeking to recover the inmates’ humanity and share it with the world, acclaimed journalist Bill Moyers led a creative team in filming the documentary Rikers: An American Jail. The documentary, along with the conditions at and the future of the prison complex, were the topics discussed during an event at Fordham Law on Feb. 20.

The event, which followed New York City officials’ public considerations of the prison’s fate and the possibility of its closure in advance of an originally planned ten-year timetable, came at an opportune moment in city politics.

“We are beginning to see glimmers of light near the end of this dark tunnel,” said Matthew Diller, dean of Fordham Law, during his welcome address. “We here at Fordham Law are dedicated to shedding additional light on all of these issues.”

Bill Moyers delivered an introductory speech at the event, which was co-sponsored by the National Center for Access to Justice; the Center on Race, Law & Justice; the Urban Law Center; and the Fordham Urban Law Journal.

“I wanted to put a human face on the culture of human cruelty that flourished at Rikers,” said Moyers, who served as executive editor of the film. “There is no more powerful production value than the human face.”

The documentary gives former inmates a platform to share their personal experiences at Rikers and to inform the world that the institution is inhumane and antithetical to the democratic ethos of the country.

“Our city’s largest jail is a microcosm of so much that is wrong with mass incarceration today,” said Moyers, who before his journalism career worked as press secretary to President Lyndon B. Johnson. “Mass incarceration is the sharpest edge of American racism today.” 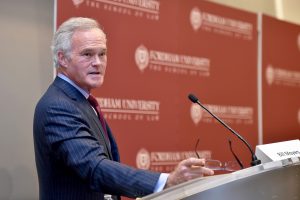 A panel discussion followed Moyer’s introductory remarks. The panelists’ conversation, which was interspersed with clips from the documentary, was moderated by Scott Pelley of 60 Minutes.

“The event could hardly be more timely with the mayor’s press conference last week, identifying four new jail sites in four of the boroughs to replace Rikers Island, and then the state coming in on the same day saying that the mayor’s plan to do this in ten years was woefully inadequate,” said Pelley.

“It’s a haunting film, and it tells us all what we should know by now: that Rikers is an accelerator of human misery,” said Lippman, who stressed the importance of reducing the prison population and who recommended, after the prison’s eventual closure, building a monument on the island to remind our nation what the criminal justice system should not be.

“We are working in my office very carefully and daily on bail reform,” said Gonzalez. “When a prosecutor asks for bail, they must write to me and my executives the cases they’ve asked for bail on and they must justify why they’re asking for bail.”

Formerly incarcerated himself, Richards shared his experience of the dismal prison conditions.

“The way you survive is through violence, and you learn that from day one,” he said. He added that, if not given proper assistance immediately after their release, former inmates often end up back in prison.

The culture of violence at Rikers affects both detainees and correction officers, who are ten times more likely to experience assault at Rikers than any other facility. The panelists discussed how, going forward, the city must work to reduce population size, to create healthier facilities, to rethink the definition of a correction officer, and to address mental health issues.

The city is currently working to open smaller jails in each borough, with the exception of Staten Island. The initiative would reduce inmate population size and allow inmates to be closer to their families.

“I believe that we could achieve borough-based jails within five years,” Crowley, adding that Staten Island, too, should host a jail.

Above all, panelists agreed on the need for a cultural shift, stressing that citizens of this country need to think of prison not as a place of punishment but as a locus for reform.

“The overwhelming goal of these systems, especially jail systems, should be to treat people in them with the sanctity and respect of human dignity,” said Jacobson.

The event is part of the Law School’s A2J Initiative, which focuses the collective public service energy of the School to ensure greater access to justice through teaching; direct service; and scholarship, research, and advocacy. 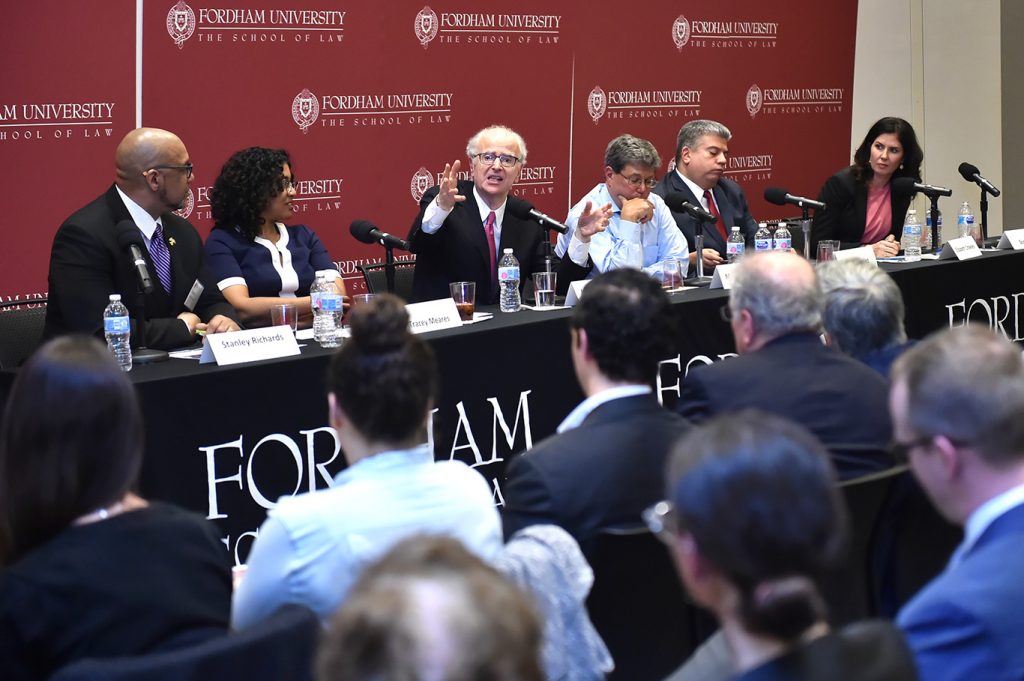