skip to main content
Return to Fordham University
You are at:Home»Law»Panel Explores Religious Dress Codes in Secular Society
Panelist Asra Nomani recruited four volunteers to wear various garments, including a burka, while she spoke. Photo by Bruce Gilbert
Is a hijab an expression of religious faith, or a symbol of intolerance toward women?

Can a woman dress modestly and not inadvertently cast aspersions on those who dress more revealingly?

And what role should the law play in determining the rules?

In response to recent bans in France of “burkini” bathing suits, the Fashion Law Institute at Fordham on Sept. 9th held “The Body Politic: From Banning Burkinis to Designing Democracy.” The lively panel discussion ranged from the political ramifications of fashion through the years to the evolution of U.S. law on religious expression.

Elnakib cited a real demand for her label’s product among Muslim women who wish to express their faith by covering up, but who want to look good at the same time. She disagreed with the notion that covering parts of one’s body could be construed as a symbol of oppression. American fencer Ibtihaj Muhammad, for example, both won a bronze medal at the 2016 Olympics and honored her faith by wearing a hijab.

Elnakib said the recent burkini ban in France baffled her.

“At the end of the day, it’s a personal choice. My relationship between me and God should not be intervened in by my dad, my husband, and especially not by a lawmaker,” she said.

Susan Scafidi, founder and academic director of the institute, shared some historical perspective on France’s clothing laws, noting that clothing has always been tied up with politics. During the French Revolution, men who fought against the French monarchy distinguished themselves sartorially by wearing long trousers while the aristocracy wore knee-length culottes and silk stockings. Their female compatriots, however, were prohibited by statute from wearing pants. (That statute was still technically on the books until 2013.)

The United States, she said, has always been more open to religious expression, as exemplified by founding documents such as the First Amendment.

“We do have a clear separation of church and state written into the Constitution,” said Scafidi. But compared to France’s “Trump-size wall separating church and state,” the United States operates along the lines of “more of a little picket fence.”

Scafidi said there were still plenty of issues and assumptions about clothing to be addressed. Among them are what constitutes decency, the discredited idea that a woman’s clothing choice indicates consent to sex, and whether non-Muslim women traveling abroad should wear a hijab to accommodate conservative Muslim sensibilities. 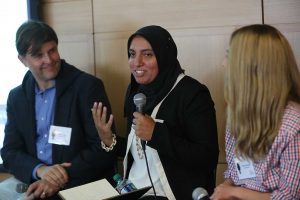 Panelist Asra Nomani, co-founder of the Pearl Project at Georgetown University, said that Muslim women who cover up are being sold a “bill of goods” by leaders in Saudi Arabia and Iran.

Nomani read two translations of a verse in the Koran addressing the issue of covering up: One from an older volume that was arguably ambiguous with regard to women’s clothing, and another from a newer version—published in Saudi Arabia—that clearly elevated the burka, which covers a woman completely, over the hijab and the niqab, both of which leave parts of the face exposed.

“We value the idea of the dignity of women. We’ve all agreed on that. But if we accept an assumption that one person—that is the woman—has to be covered in order to protect her honor and to protect men from being sexually aroused by her presence, then we are essentially judging her by … [physical]standards,” she said. “The same as Western society.”

Nomani, a Muslim, said she was appalled that she and other women attending the trial of a 9/11 conspirator at Guantanamo Bay were encouraged to cover their hair, so as not to distract the defendant.

“This is not a debate between Islam and the West. This is a debate between values and ethics. I, in Guantanamo Bay as a Muslim woman, do not want to cover myself to please a man who decided that it was okay to drive planes into the World Trade Center.”