skip to main content
Return to Fordham University
You are at:Home»Inside Fordham»One Wrongly Accused Speaks on the Challenge of False Confessions
Jeffrey Deskovic, executive director of  the Jeffrey Deskovic Foundation for Justice, was just 16 years old when his friend Angela was found murdered on Nov. 17, 1989 in upstate New York. In all of the disturbance surrounding the event, Deskovic said he was lured into a false confession by zealous police officers under pressure of a polygraph test, and the teenager ended serving several years in prison for a rape and murder he did not commit.
Deskovic addressed his ordeal to more than 100 students, administrators, and faculty at a Sept. 26 Fordham Law-Psychology seminar at the Lincoln Center campus, co-sponsored by Psi Chi, SPSSI-NY and the Manhattan Psychological Association. The seminar was part of a Law & Psychology course being given by Harold Takooshian, Ph.D., professor of psychology.
Deskovic said his repeated appeals were all denied, including the a U.S. Supreme Court appeal in 2001. The Innocence Project at first rejected him, too, until investigator Claudia Whitman intervened, and he was fully exonerated in 2008 with a simple DNA test that identified the true killer of his friend.
Since then, Deskovic has used a $1.5-million compensation to launch his foundation, which works to free other innocents in prison and to help correct the legal system. The foundation works with the Innocence Project to advocate dozens of important reforms, including: videotaping of all confessions, preservation of DNA evidence, limiting incentivized witnesses, requiring corroboration for informants, and punishment of prosecutorial misconduct.
The forum also featured Robert Emmons, Ph.D., professor of psychology at the University of California, Davis, forensic psychologist Ann Winton, and attorney-psychologist Cory H. Morris. 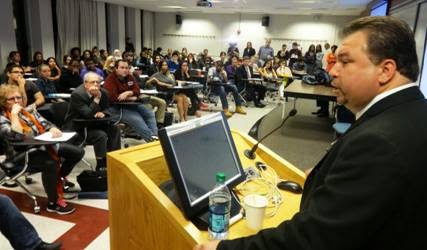