“What is the law for? To serve a society of people—all people, not just the wealthy.”
–Justice Ruth Bader Ginsburg

As a young woman growing up in Brooklyn in the 1930s and 40s, Justice Ginsburg did not aspire to become a Supreme Court Justice; women were, after all, generally dissuaded at the time from becoming lawyers, and it would be a half century until the first woman would be appointed to the Court. 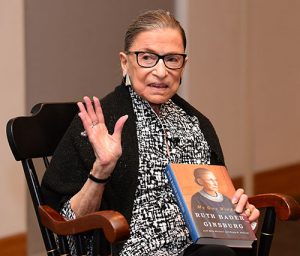 Today, nearly all gender-based distinctions, with the exception of some in the area of immigration law, have been excised from state and federal law, Justice Ginsburg noted. Women are also better represented in the branches of government, with a major party presidential candidate, 20 U.S. senators, and the three current Supreme Court justices, she noted.

“We have come a very long way, but there are still hurdles,” Justice Ginsburg said, adding unconscious bias, as opposed to outright discrimination, and work-life balance are the biggest issues women face today.

Justice Ginsburg credited former President Jimmy Carter, who appointed her to the United States Court of Appeals for the District of Columbia, with changing the gender dynamic of American courts in his lone four-year term. Carter appointed 25 women as district court judges and 11 as appeals court judges. Not wanting to be outdone, Carter’s successor President Ronald Reagan nominated Sandra Day O’Connor as the first woman to the Supreme Court.

After Justice Ginsburg began serving on the Court in 1993, a handful of attorneys seemed not to be able to conceive of a Supreme Court bench with two female justices; Ginsburg told the Fordham audience that, near the beginning of her Supreme Court tenure, some individuals arguing before the Court mistakenly addressed her as Justice O’Connor.

“Schoolchildren would stream in and out of the Court for 10 minutes, and they would see eight men—eight rather well-fed men—and me,” Justice Ginsburg said. “The picture was not quite right.”

Today, the gender ratio has improved, and Justice Ginsburg is not easily confused with her two fellow female colleagues.

In addition to her female peers, Justice Ginsburg spoke at length about the late Justice Antonin Scalia and former Chief Justice William Rehnquist, in response to Saiger’s questions. 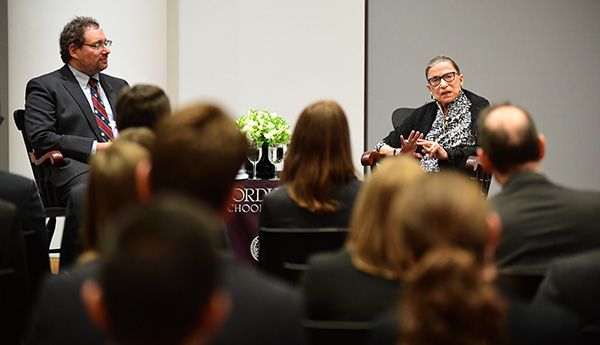 Justice Scalia’s sudden death in 2016 left the Court with only eight members. In the aftermath of the noted conservative jurist’s death, some Supreme Court–media neophytes were surprised to learn that he and the liberal Justice Ginsburg were close friends, who shared a love of opera among other interests.

“The Court is a paler place without our lively Justice Scalia,” Justice Ginsburg remarked. She expressed hope the Senate would affirm a ninth justice prior to the end of its current term. (The Senate has refused to hold a vote on President Barack Obama’s nominee Merrick Garland for more than six months.)

For instance, she spoke about the origins of her famous nickname, which derived from a Maryland law student’s Tumblr and later became the title of a best-selling book.

“Obviously, the reason I’m the Notorious RBG is because of the rapper the Notorious B.I.G.,” explained Ginsburg, who is releasing a new book next month titled In My Own Words. “The two of us have at least one important thing in common: we were both born and bred in Brooklyn, New York.” Ginsburg waited for the applause to abate before adding, “It is amazing that at age 83 everyone wants to take a picture with me.”

Asked by a student whether she owned a smartphone, Justice Ginsburg said she has two, but that they were “not for selfies.”

Toward the end of her talk, Justice Ginsburg challenged students in attendance to use their legal talents to repair tears in their communities, noting she received the most satisfaction from work in which she received no compensation.

Access to justice is a serious problem in America, she said. She referenced the fine print in cell phone and credit card agreements that bar class-action lawsuits as one notable example. She also declared Citizens United, with its significant financial impact on elections, the most regrettable Supreme Court decision in recent memory.

“What is the law for?” she asked the audience, before answering her own question: “To serve a society of people—all people, not just the wealthy.” 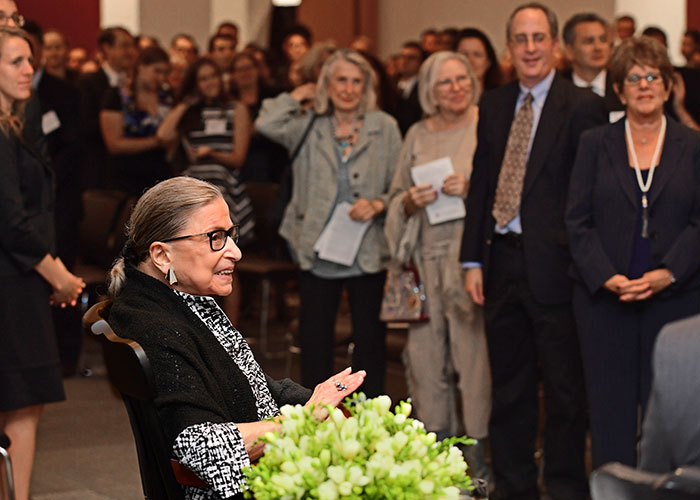