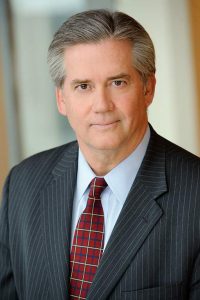 In the field of law, there’s virtually no end to the direction that antitrust law can take you. Entities as diverse as  cable companies, sport’s leagues and concrete manufacturers have at one time or another been accused of  anticompetitive behavior in a variety of jurisdictions across the globe.

On Oct. 1, the Fordham Competition Law Institute will highlight many of the noteworthy aspects of the antitrust field at the 42nd Annual Conference on International Antitrust Law and Policy.

And the institute will be doing so under the leadership of antitrust attorney James Keyte, a partner at Skadden, Arps, Slate, Meagher & Flom LLP. Keyte, who has been teaching as an adjunct professor at Fordham Law for five years, took over this year after longtime director (and former Skadden partner) Barry Hawk stepped down. Hawk, who now serves as senior counsel at Labruna Mazziotti Segni, will be honored at the conference and will still be involved in an advisory capacity.

The transition has been a natural one. The two have been Skadden colleagues since 1989. Five years ago, Hawk invited Keyte to co-teach a course on comparative antitrust law at Fordham Law. Keyte taught the course solo a year later, and in 2013 and 2014, he moderated panels at the school’s antitrust law and policy conferences.

Having written over 30 scholarly articles in the subject area, Keyte said he felt ready to accept Hawk’s position.

One of the events Keyte said he’s excited about is an upcoming “Antitrust Economics for Young (and Old) Lawyers” Workshop, scheduled for Sept. 30. New this year, the workshop is meant to augment the Conference with the kind of economic analysis  that is integral to antitrust work today.  Charles River Associates will run the morning session, and Cornerstone Research will run the afternoon session.

“Whether it’s in merger work, private litigation, monopolization or conspiracies, the lawyers, courts, and enforcement officials work hand-in-hand with economists all the time.  In such an environment, it is very useful to have a workshop that covers basic and advanced economic tools, especially for young lawyers,” he said.

The second and third days of the conference will feature a series of panels − “Women in Antitrust” and “Media Mergers” being two of them. Another panel, “Antitrust in a Mobile World” will cover a range of antitrust topics related to today’s mobile environment, including some of the ongoing multi-jurisdictional debates surrounding Google.

In fact, Keyte noted that many antitrust disputes revolved around fundamentally different philosophies in the United States and Europe. For example, he said there’s a doctrine called the essential facilities doctrine, which is essentially dead in the U.S., but very much alive in much of the EU.

Keyte said he’s excited to dive further into the “geeky” academic aspects of antitrust law, especially as this has been inherent to his nearly 30 years of practice. It’s particularly gratifying, he said, to work with people that in some other setting may be an adversary.

“Sometimes you’re litigating against colleagues in the Department of Justice or the Federal Trade Commission,, and now you get to pick up the phone and talk to them in a different capacity,” he said.

And, of course, he said “it is wonderful to meet new people – other enforcers, practitioners and academics – from around the world that share your passion for antitrust.”