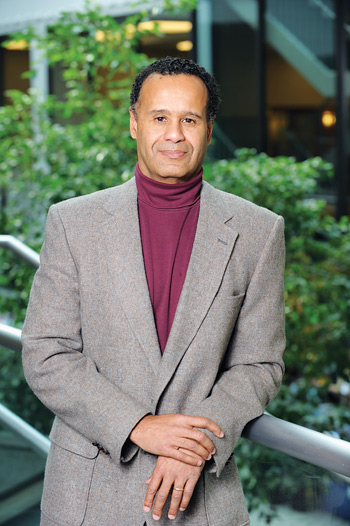 The Second Amendment to the United States Constitution is only 27 words long, but it has provided Nicholas J. Johnson a lifetime of work.

Johnson, professor of law, has written extensively on gun ownership in America, which is enshrined in the Constitution as follows: “A well-regulated militia, being necessary to the security of a free state, the right of the people to keep and bear arms, shall not be infringed.”

In 2008, after some two decades of writing about the subject of gun ownership, Johnson was poised to shift more effort toward his work in commercial law. Then the U.S. Supreme Court ruled in District of Columbia v. Heller that the Second Amendment protects an individual’s right to possess a firearm for traditionally lawful purposes such as self-defense. The decision was limited to federal enclaves, but two years later, the court applied the right to states as well.

Following these cases, Johnson received a variety of requests for assessments of their impact and renewed interest from publishers in a long discussed Second Amendment textbook. While working on these various projects, Johnson refocused on an underappreciated story: the historical role of gun ownership in the African-American community.

“I’ve always been intrigued with how the black community has dealt with the gun question, because I was aware for a long time of the disconnect between the community’s long tradition of armed self-defense, and the modern, glib perception of what people who care about the community should embrace as firearms policy,” he said.

“When you pick up a biography of anybody in the Civil Rights movement, or any notable black historical figure, it’s very common to find a reference to gun ownership and self-defense. Not until you think about it from the broad perspective do you discern the tradition. There is a sharp divide between that tradition and the dominant view of the modern black political class. At the heart of that divide are intriguing practical and normative policy questions.”

The details are laid out in Johnson’s paper, Firearms Policy and the Black Community: An Assessment of the Modern Orthodoxy, to be published this year as the centerpiece of the Commentary issue of the Connecticut Law Review. That research is the foundation for a book now in progress.

The paper describes a robust “black tradition of arms” running from the middle of the 19th century through the 1960s. The tradition declined starting in the 1970s when the black political establishment began to embrace what Johnson terms a “modern orthodoxy” that advocates stringent limits or bans on individual ownership of guns.

From Frederick Douglass describing a good revolver as the best response to slave catchers, to Martin Luther King Jr.’s reaffirmation of African Americans’ rights to defend themselves against very real threats, there existed in practice and policy a long tradition of armed self-defense in the black community. This was particularly important where state and local governments were neglectful or overtly hostile to blacks. The challenge, said Johnson, was to avoid spillover from self-defense into “political violence” that would trigger a backlash from authorities and jeopardize coalitions with progressive whites. The Black Panthers can be seen as a cautionary example of a group that brought about this sort of backlash.

“You’ve got self-defense on one side, and this concern about a spillover into political violence on the other hand,” he said. “It’s a tough dance.”

African-American leaders’ shift to endorse what Johnson calls “supply-side gun control”— i.e., limiting access to guns through full or partial bans—came about in part because they began to have success in the political arena and now were directly responsible for addressing crime in their new domains. Things were changing. Instances of the police aiding and abetting lynch mobs, for example, disappeared over time. But the core concern about state failure remained.

“Once you step out of the racial context, traditional self-defense interest continues as a necessary response to state failure, [which]is in fact the thing that undergirds our [overall]model of self-defense,” he said.

“What we [still]say is you have a right to defend yourself within that window where the state is unable to act. That window of imminent threats remains.”

Johnson notes that there are an estimated 300 million privately owned guns in the United States, making it logistically impossible to remove them all. “The result in U.S. jurisdictions that have attempted this was to tilt the distribution of guns sharply toward the worst people in the community and to leave good people vulnerable.”

“We live in an armed society, and we can’t wish the guns away. So what is sound policy? What interests should we privilege? I argue that we should privilege the interest of innocents. I believe the policies of ‘modern orthodoxy’ tend to submerge the interest of innocents—that is, people who are just trying to live in those neighborhoods rife with violent threats —people like Otis McDonald and Shelly Parker, black plaintiffs whose claims fueled the litigation that resulted in the Supreme Court’s recent affirmations of the individual right to arms.”

This focus on innocents sharpens into a question about the risks and benefits of guns in private hands. “Although we rarely hear about it in the national press, there is a great deal of beneficial defensive gun use by honest people. On the other hand we are highly sensitive to the costs guns impose on innocent people, through aggressive crime, accidents and stray shots. When you press into the data, there is a good case to be made that the benefits exceed the costs.”

Johnson said that more empirical work needs to be done in African-American neighborhoods, in order to provide a closer, honest assessment of the tipping point between the risks versus the utilities of guns in particular neighborhoods.

“This is something that could move us closer to a right answer. You might be able to say, [stray shots]are horrible, but the benefits of gun ownership outweigh it, or yeah, you’ve got an interest in [owning a gun], but the costs outweigh it. You could come to a fair assessment on that question,” he said.

Translating this into policy is a more difficult matter. “Practical realities constrain our policy choices. We are a pervasively armed society, with an exceptional cultural and constitutional commitment to armed self-defense.

“The black tradition of arms is part of that milieu. The modern orthodoxy has never been compatible with that reality.”