Rosemary* and her husband dated for nearly a decade before the Crown Heights, Brooklyn, couple decided to finally tie the knot in 2003.

Their marriage proved much shorter, though.

They’d had two children together prior to the time they married, and a third arrived not long after their wedding. It was bad enough that Rosemary’s husband did not take care of the children, made her quit every job she took on, and refused to let her take classes or have other friendships. But he also signed up for numerous credits cards and plunged the couple into debt.

The final straw came when he fathered a child outside of the marriage—even as he was accusing Rosemary of infidelity and verbally abusing her for wearing short skirts.

In 2009, they separated. For Rosemary, divorce was too costly to undertake. So she turned to the Sanctuary for Families’ Center for Battered Women’s Legal Services, for a no contest divorce.

Each year Fordham Law sends five teams of students to the center to interview clients, such as Rosemary, and help them submit critical documents to court as part of the Uncontested Divorce Project.

It’s the kind of messy, unpredictable, face-to-face work with clients that students might expect to deal with upon graduation, said Yi-jen Chang, deputy director of the matrimonial and economic justice project at Sanctuary for Families.

“When I talk about interviewing a battered victim or a survivor, [students]have to pay really close attention. Survivors may not remember things because it’s too traumatizing to remember, or they may minimize things.”

Sanctuary for Families works in all five boroughs, and as such, Chang said the clients hail from a wide array of backgrounds.

“We have Chinese clients who suffer severe physical violence from their very religious or seemingly docile partners; we have a client whose husband is in the Russian mafia. They could be a professor, a diplomat, a taxi driver, or could operate a takeout Chinese restaurant,” she said. 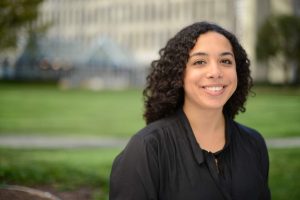 Sasha Fisher, a third-year law student who’s coordinated the Uncontested Divorce Project for the past two years, got a taste of how messy things can get outside of the classroom when, in her first year, she and a partner were tasked with working with a woman whose husband of three years had become violent. After meeting with the students twice, the woman changed her mind and opted not to get a divorce.

Fisher, a 2013 Fordham College at Rose Hill graduate from San Francisco, said she was discouraged at first that the work they’d done was for naught. But she has since realized it was a valuable lesson nonetheless.

“I think this is an experience that a lot of lawyers have. You work as hard as you can for every client, even if the outcome is not what you initially think it will be,” she said.

“It was also a very valuable lesson in client autonomy, which is something that I believe very strongly in. Our clients are adults, and they can make those decisions for themselves.”

Fisher credits two classes she took with sociology professor Jeanne Flavin, PhD, on the U.S. prison system, gender crime, and criminal justice for spurring her interest in family and criminal law. She is now interviewing for positions in the public defender’s office.

The DVAC is one of 24 student clubs under the auspices of the Law School’s Public Interest Resource Center. Fisher said she was drawn to it because of the opportunity to work directly with clients.

For Katherine Wentworth-Ping, a first-year student, involvement with the center is a family affair, of sorts. Her husband volunteered there when he attended Fordham Law. And when she was an undergraduate, her older sister inspired her to work with refugees and asylum seekers who’d survived domestic violence.

The first year of law school can be very inward-oriented, she said, with much emphasis on classwork, so volunteering is a nice break.

“It’s great to actually get outside of that 1L mindset and recalibrate to all the different parts of the profession, and this happens to be a very gratifying part of it—really helping someone in need,” she said.

Tom Schoenherr, assistant dean of the Public Interest Resource Center, said the DVAC was the first student group formed when the center was created 22 years ago.  The partnership with Sanctuary for Families began in 1997.

“Year after year, we find anywhere from a quarter to a third of the entire student body who are willing to dedicate additional time to a volunteer project. They’re not getting academic credit; they’re not getting any money,” he said.

“They feel that whatever project they choose to affiliate with is a very important thing to be involved with even during law school, which is very busy.”

And the feeling is often mutual, Chang said.

“A client told me, ‘I can truly use the word ‘compassionate’ to describe the students. They really want to listen, to get to know me and to know my story,’” she said.

(*Name has been changed to protect her identity.)