Social distancing saves lives. But how are you supposed to guard against infection from the coronavirus if you’re trapped in an environment where social distancing is impossible?

For the past five weeks, students and staff at Fordham Law School’s Federal Litigation Clinic and Criminal Defense Clinic have been working to secure the release of inmates whose medical conditions make them vulnerable to the COVID-19 virus, as well as those whose sentences are almost complete and those who are being held while awaiting trial. They are arguing that all inmates are at risk of contracting COVID-19 because of how quickly it spreads in spaces where people are in close proximity to each other.

The Federal Litigation Clinic, which is supervised by Michael W. Martin, associate dean for experiential learning, Ian Weinstein, former associate dean of clinical & experiential programs, and Jennifer Louis-Jeune LAW ’08, scored two victories in recent weeks. In the first case, they worked with prosecutors to secure the release of a man convicted of financial fraud whose sentencing date had been delayed due to the pandemic-related slowdown in court proceedings. Waiting for his sentencing in a federal detention center, they argued, made him vulnerable to contracting COVID-19.

By the time his sentencing date would have happened, he would have served more time waiting in prison than he was required to. An added wrinkle in the case was the fact that man is not a U.S. citizen, and has few ties to the country.

“Part of this process was finding an adequate place for him to stay and making sure he has adequate resources to survive in the interim. It takes some creative thinking and hard work, and the students were able to do that creative thinking and hard work to land this person in a compatriot’s home who had not known him before, and has been very generous to him,” Martin said.

In the second case, the clinic won a federal habeas petition on a faulty gun conviction that enabled a client facing deportation to win his immigration case, and thus release him from ICE custody. The students’ work not only assisted in releasing their client from custody, where their client was at risk for contracting COVID-19 every day he was still incarcerated, but also allowed him to remain in the country and return to his 8-year-old son. This reunion was particularly poignant as the son’s mother (the client’s fianceé) had died during the client’s incarceration.

“This is a client I’ve had for five years who really believed he had no chance of being reunited with his family, and today he’s with them, lying in his own bed, taking care of his son, which is really great news. The students knew it was important to get him out,” Martin said.

“Every lawyer should know what it is like to hear a released client tell him that the air never smelled so sweet.”

Meeting a Threshold for Freedom

The clinic, which is staffed by 12 law students, has up to 15 clients at any given time. Martin said roughly a third of its current clients potentially meet the COVID-19 threshold the Department of Justice has put in place to determine if they’re eligible for early release. Those conditions include inmates who have only a few months left on their sentence; those whose crimes did not include physical violence; those with ailments that make them especially vulnerable to COVID-19, such as serious breathing or immunological conditions; and the elderly. His students have taken to the job with extraordinary zeal, he said.

“Their clients are literally in life-and-death situations at this very moment. There’s a certain level of exigency if your client is far more vulnerable to the pandemic than others, and frankly they are going to be far more vulnerable just because of where they’re placed,” he said.

Sophia Porotsky, a second-year student at the Law School, said working for the clinic has energized her and strengthened her desire to do civil rights work after she graduates. She said it became very apparent early on that the legal landscape in which they’d be working had shifted dramatically with the COVID-19 outbreak, as the federal authorities realized they couldn’t protect all inmates from harm.

“We were able to see on listservs that other lawyers were getting bail applications, and they were relying less on established law and more on the conditions we’re in right now,” she said.

“At first, it started out as, this is kind of a wild shot, but we have to try. But as we started to communicate more with the U.S. Attorney’s office, we started to see that actually both sides are working to try to reach the same goal.”

That shift in the government’s posture is far from uniform, she said, but it did contribute to the clinic’s two recent successes, which she said had surprised her.

“Every step of the process, there was a new hoop that we had to jump through or a new problem to solve, and every time we hit a wall, we found a way around it, or the U.S. Attorney’s office responded in a way that we didn’t expect,” she said.

“I’ve been surprised at how resourceful people in the clinic are, and how we’ve been able to put our heads together to solve problems, and not hesitate to reach out to the other side to help problem-solve.”

Martin agreed that the pandemic has illustrated the folly of assuming that one side of the criminal justice debate is strictly in favor of incarceration, while another is against it.

“Our criminal justice system has a lot of flaws and this pandemic is actually revealing some of them. But there’s no question that there are people within the system on all sides who at some level are trying to help,” he said.

Helping Those Who Have Served Their Time

They supervise a cohort of pro-bono scholars who have recently taken the New York State Bar exam and are now spending their final months in law school providing full time representation to clients who have either been accused of misdemeanors in New York City courts or are serving long sentences in state prisons for felonies. 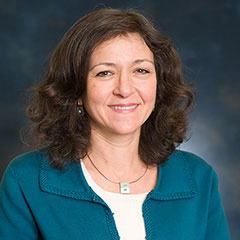 But because the pandemic severely curtailed court operations, the clinic has had to think creatively about ways to make sure its four clients awaiting trial in criminal court are zealously represented. Their rights to a speedy trial, for instance, are at risk at the moment, as the normal efforts to locate and interview witnesses have been severely limited. In contrast to the holding pattern for criminal court cases, there has been added urgency for some of the clinic’s six clients who are currently incarcerated. This includes a woman who has only a few months left in a 25-year minimum sentence for a felony she committed, and whose release they are working to secure.

“She is really in the crosshairs of COVID based on her age and her underlying conditions, so the students have been working hard to try to secure her release earlier than her minimum sentence, which has proved to be challenging,” Bader said.

“This is somebody who has used her time in prison to better her life, and she came before the parole board, who found that she should be released back into society, and she will be reentering society in a few months. So, for her to be incarcerated during a time when it’s dangerous to be in prison, when she can’t socially distance herself, and she has underlying conditions that increase her risk of dying, makes no sense.”

While advocating on behalf of their incarcerated clients, it became clear to the students that a major source of stress for their clients was the lack of any official communication about the impact of the virus on the incarcerated population and on their loved ones on the outside. In response, students in the Criminal Defense Clinic are producing a weekly newsletter for their clients to keep them up to date on pandemic-related news. News is tightly controlled in prisons under even the best times, and accurate information has become even harder to come by now. Bader dubbed it an “abyss of the unknown.”

“It’s much worse for those in prison, because even though there are a lot of things about the pandemic we don’t know, we’ll eat up any news and any information that comes across our desks or screens and we at least know what we don’t know. There, they don’t even know whether there’s information that people on the outside know that they don’t have access to, and so rumors abound in prison” she said.
“Clients have been extremely appreciative about the information the newsletter provides and we know they have been sharing widely with other incarcerated individuals the four newsletters that we have sent so far.”

Martin agreed that it’s been very challenging to communicate with clients. In one case, he needed to tell a client whose release he was trying to secure that once he was out of federal custody, immigration authorities might come looking for him, and some would prefer to be in federal custody in New York City than in ICE custody in Pennsylvania or Mississippi.

Working from the Kitchen Table

Emma Lee Clinger, a third-year student and a Stein Scholar, said she’s been preparing to do the kind of work she’s doing in the Criminal Defense Clinic since she was an undergraduate. She didn’t expect to do it from Fort Myers, Florida, though.

“I never thought I’d be sitting at my parent’s kitchen table every day, taking calls from corrections facilities in New York. Sometimes they just stand in the kitchen and watch me talk to a Department of Corrections employee and they’re like, ‘Who are you?’” she said.

In fact, she said, her situation grounds her further in the work of the clinic. Communication is the bare minimum of what’s needed to survive this pandemic, and it’s something her clients—unlike her and her family—lack.

The teamwork that the members of the clinic have displayed has also inspired her, as members have continued to put their clients’ needs first, even when they face challenges of their own.

“It fuels me to continue to do the work. When something is going on in one of our lives, we just pick up their work and keep moving and keep fighting, because we know whatever’s going on with us is just amplified in our client’s lives,” she said.