skip to main content
Return to Fordham University
You are at:Home»Inside Fordham»Investors, Investing in the Liberal Arts 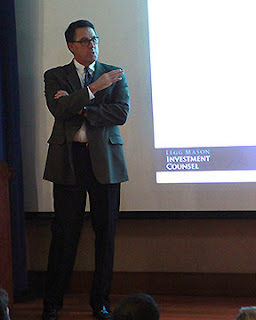 What does literature have to do with value investing? What about biology? Or philosophy? Well, according to author Robert Hagstrom, it has quite a bit to do with it, as does physics, sociology, psychology, and all of the other humanities.

At a talk sponsored by the Gabelli Center for Global Investment Analysis on Nov.13, Hagstrom told students that an imaginative investor must look beyond the realm of the business world, as was the main thesis of his recently republished book, Investing: The Last Liberal Art (Columbia University Press, 2013).

Hagstrom, chief investment strategist and managing director at Legg Mason Investment Counsel, said that many of the liberal arts might seem like no-brainers when it comes to investing, in particular the “seductive science” of physics. He used Sir Isaac Newton’s second law of action, which states that “for every action there is a second and opposite reaction,” as the obvious example.

However, he said, a new school of thought is emerging, one that sees the markets’ complex behaviors as more akin to biological science than the mathematical precision of physics.

“Markets are more complex,” he said. “They learn to adapt.”

As biological conceptions are more complex to comprehend, investors continue to rely on mechanical analogies, he said—although some economists are segueing into studying the markets as complex adaptive systems not unlike the human immune or neurological systems. And although there is plenty of resistance from the “old guard,” investors will, increasingly, begin to adopt a biological interpretation of the market.

Moving on to philosophy, Hadstrom called philosopher Lutwig Wittegenstein “the philosophical father of investing.” In particular he focused on Wittegenstein’s work in language, honing in on the phrase “the meaning of the word is its use in language.”

He went on to explain how language used to describe Amazon in its early days clouded investors’ perceptions of the company. Since Amazon started out selling books, many investors first compared the company to Barnes&amp;Noble. As Amazon’s inventory diversified, investors began to compare it to Wal-Mart.

But Hagstrom said the comparisons were not accurate. Brokers were concentrating on what the company sold–not on how it was organized. Amazon, he said, was much more like Dell Computers–the single best-performing stock of the 1990s.

When a customer ordered a Dell computer, Dell immediately collected the money and delivered the computer in five days. They didn’t need to pay suppliers for another 30, 60, or 90 days—a system known as “negative working capital.” Amazon did the same thing.

If the meaning of a word is its use in language, then the “meaning” of a company can be found in language as well.

While Hagstrom acknowledged the difficulty of looking at the market through a variety of academic or literary disciplines, he said doing so would give investors more to draw from when attempting to solve the market problems, and also give them a more enlightened view of the world.

“Everybody watches CNBC and reads The Wall Street Journal,” he said. “[But] you’ve got to think, ‘Every now and then I’ll read a detective book to solve problems, because maybe that’ll make me a better analyst.'”

“People will notice that you think differently and that makes your more valuable to your company… and it makes you great a cocktail parties too.”