skip to main content
Return to Fordham University
You are at:Home»Inside Fordham»How the United States Became the World’s No. 1 Jailer

Over the past 30 years, the response to prison overcrowding due to harsher laws and longer sentences has been a growing number of government-contracted for-profit prisons. 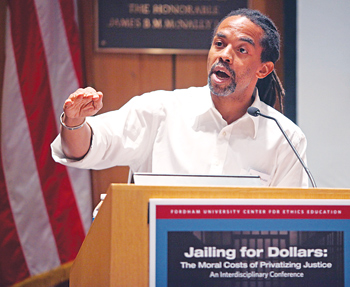 Thomas Giovanni, of the Brennan Center for Justice.
Photo by Bruce Gilbert

On April 23, a panel at Fordham said these privately owned and operated prisons raise urgent moral concerns about how justice is carried out in the United States.

Sponsored by Fordham’s Center for Ethics Education, “Jailing for Dollars: The Moral Costs of Privatizing Justice,” held at Fordham School of Law, featured a panel of experts that included Cindy Chang, staff writer for Los Angeles Times; Thomas Giovanni, counsel to the Justice Program at the Brennan Center for Justice; Michael Jacobson, Ph.D., president and director of the Vera Institute of Justice; Judith Greene, policy expert at Justice Strategies; and John Pfaff, associate professor of law.

Panelists discussed the rising danger of prison overcrowding. As states have begun to outsource prisoners—California sends inmates as far as Mississippi, while Hawaii has 1,700 male inmates housed in a prison in Arizona—private prisons have taken up the excess.
Pfaff questioned, however, whether private facilities are in fact driving prison growth, or whether they are merely part of a complex problem fueled by politics.

These politics, Jacobson said, are characterized less by Republican versus Democrat and more by “upstate versus downstate,” as private prisons are largely concentrated in rural areas.

“Prisons have been used as a form of [rural]economic development in communities across the country—that’s a bad thing,” Jacobson said. “It’s one of the many reasons that closing prisons is so difficult. These communities fight to have them and keep them.”

Even if private prisons have not caused the prison crisis, Jacobson said they represent an obstacle to future reform.

Chang, who spent a year researching the correctional system in Louisiana, which has the highest incarceration rate in the country, found that private prisons also bring resources and jobs to law enforcement.

“One sheriff said that he hates to make money off of the back of some unfortunate person, but he also remembers when the police force had nothing—they had to share shotguns on patrol,” she said.

“[Unfortunately] If you’re putting all this money into locking people up, then you have less money for schools, or for making neighborhoods better, which is why some people end up in prison in the first place,” she said.

Giovanni said the nation must address soaring incarceration rates, which are spurred by harsher laws and sentencing.

“Too many things are crimes that should not be crimes,” Giovanni said, citing stringent trespassing, loitering laws, and policies related to the so-called war on drugs. He said the private prison debate should not overshadow the focus on the goal of policy to improve the human beings in those cells.

“When we think about prison policy legislation—we wrote it, we can erase it… That’s going to take a lot of fuel out of the fire.”