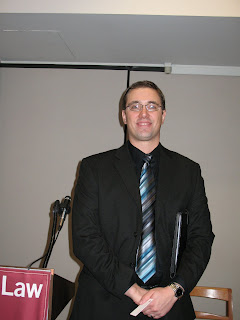 As a young man, an armed Shon Hopwood robbed five banks in rural Nebraska, netting some $200,000.

Luckily for him, and a score of terrified bank tellers, he got caught.

Hopwood went to federal prison in 1999 with a 13-year sentence; it was there that Hopwood turned his life around.

He got a job in the prison law library because it paid more than working in the kitchen. He trained himself in Supreme Court litigation, and built a national reputation as a jailhouse lawyer before he was released in 2009.

During his eleven-year incarceration, Hopwood wrote more than 20 petitions for certorari to the U.S. Supreme Court, and helped on between 50 and 100 appeals, motions and other documents – enabling a number of inmates to win sentence reductions. One of his cases, Fellers v. United States, was even adopted by Seth P. Waxman, former United States solicitor general.

Hopwood is currently writing an article for the Fordham Law Review. He spoke at Fordham Law School on Jan. 25 about obstacles that pro se litigants face in trying to advance a case.

“The increase in pro se litigation during these difficult economic times is pretty well documented,” Hopwood said. “There is nothing that will place pro se claimants on an even level with attorney representation. But just because they do not have an attorney doesn’t mean they don’t have a claim.”

Hopwood would know; today, he works at Cockle Printing in Omaha, which he says is the only printing house in the nation that works with pro se litigants. When a pro se brief comes in, he helps prepare it.

He also publishes A De Novo Review, a newsletter for inmates on the latest legal developments.

— modify the Antiterrorism and Effective Death Penalty Act (passed by Congress in 1996 as part of Newt Gingrich’s Contract with America) to allow non-capital offense prisoners more than just one year to file a legal challenge to their conviction;

— modify the Prison Litigation Reform Act of 1995, which has added case restrictions on prisoners who sue for violations of their rights, including a controversial “exhaustion requirement” which prohibits inmates from suing unless they have used all “administrative remedies” available to them;

— educate pro se litigants in their chances and their filing obligations, including setting up online tools to assist them and providing sample petitions. Most pro se litigants, said Hopwood, don’t understand the odds that are against them.

“There is much demagoguery around prisoner issues in this country,” said Hopwood. “You never hear politicians say, ‘let’s rethink these policies’ – because that talk doesn’t get you elected and labels you soft on crime.”

He also advocates more “ghost writing” of pro se legal briefs by paralegals. “That’s a win-win situation in these economic times,” he said.

Hopwood’s article will come out in the Law Review in December; in the meantime, Hopwood has applied to Fordham School of Law, hoping to practice prisoners’ rights law one day.