“Who are we not to take this on?” Lenhardt would ask rhetorically in response, pointing to the University’s commitment to social justice and the Law School’s deep and diverse constellation of race scholars.

On February 29, Lenhardt and Fordham Law School formally launched the Center on Race, Law and Justice, publicly announcing its presence as a leader on issues of race and the law in New York City, the United States, and abroad. The event featured presentations from five Fordham University professors involved in the center, including associate directors Tanya Hernandez and Kimani Paul-Emile, and a keynote address from preeminent civil rights lawyer Debo Adegbile, now a partner at WilmerHale in New York and the former acting president and director counsel at the NAACP Legal Defense Fund.

Joseph M. McShane, SJ, president of Fordham University, placed the center’s launch in historic context, noting it came more than 150 years after the Emancipation Proclamation, the death of Abraham Lincoln, and the end of the Civil War, and around 50 years after the Civil Rights Movement and the passage of the Voting Rights Act of 1965. Further change, he said, would come from conversion of hearts and a movement in which “Fordham is engaged.”

Both Diller and McShane praised Lenhardt’s vision, for transforming a decade-long dream into a reality.

Diller celebrated Lenhardt as “a superb colleague, teacher, and friend who adds insight, value, poise, and grace to everything she touches.”

“In every way that counts, you are the person who brought this to fruition,” Father McShane said to Lenhardt, noting her meticulous nature and gift for hard work convinced him this would be not a center on paper but a center in action.

The center will function as an incubator and a platform for cutting-edge interdisciplinary scholarship on race, structural inequality, and racial justice tools grounded in critical analyses, comparative inquiry, and innovative methodologies, its leaders said. 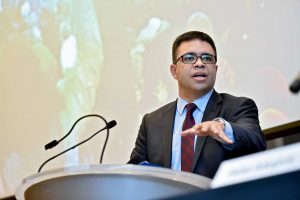 The center will not only explore the deployment of the law as a solution for racial inequity but also seek to address through original research and analysis how it simultaneously functions as the architect of such inequality in ways that strip minorities of opportunity, dignity, and belonging, Lenhardt explained.

The center’s mission, she continued, is to explore issues of race and inequality in both the domestic and global contexts and to promote conversations about access, opportunity, and discrimination at Fordham University and in the legal profession more broadly.

Lenhardt also highlighted the presence of Gay McDougall, a MacArthur Foundation “Genius,” distinguished scholar-in-residence at the Leitner Center for International Law and Justice, and the wife of the late John Payton, former head of the NAACP Legal Defense Fund and the architect of the legal strategy that led to the Michigan affirmative action cases decided by the Supreme Court, on which Lenhardt worked.

Payton’s LDF protégé, Adegbile, shared his mentor’s impact on his career in a speech that combined insight into how civil rights progress is not unilateral but ebbs and flows and that often the cases that matter most directly affect the lives of young people.

At present, Adegbile represents Harvard College in a lawsuit that challenges the constitutionality of its admissions program, one that raises the same kinds of issues presented by the Michigan cases and the Bakke case before them. Adegbile shared his view that such challenges present the questions “who are we and who do we want to be.”

Progress happens as a result not of one person’s efforts but of an intergenerational fight for change, Adegbile said, noting he viewed the center’s launch and future work as a continuation of this idea.

“Whether you’re Thurgood Marshall or Constance Baker Motley, it doesn’t matter,” Adegbile said, referring to the first African-American Supreme Court justice and first woman to serve as Manhattan borough president. “There will always be another fight. There will always be something for the next generation to do.”