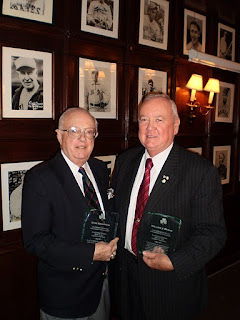 When John Cirillo, organizer of the annual Halligan-McGuire Irish-American Good Guy Awards, called William J. “Bill” Burke to tell him he was one of this year’s recipients, Burke assumed he was calling about reserving a table. The annual event, now in its second year, helps raise money to support scholarships for Fordham students.

“The markets were falling [that day],” recalled Burke, FCRH ’65, LAW ’68, managing director of investments at Wells Fargo Advisors. “I said, ‘John, I’m taking a table. But I’ll call you back after the market closes.’”

“I told him, ‘John, you can count on me. I’m taking a table,’” Burke said. “That’s when he told me, ‘Bill, it’s a bit more complicated than that. You’re one of the honorees this year.’”

Despite the initial miscommunication, Burke received his Halligan-McGuire Irish-American Good Guy Award at a luncheon at Gallagher’s Steak House in Manhattan on March 22.

Halligan started with the Rangers as a publicist in 1963, after graduating from Fordham. Eventually, he worked his way up to vice president of communications and business manager of the team. In 1983, Halligan left the Rangers for a public relations position with the NHL, before returning to the Rangers in 1986. Four years later, he returned to the league offices, where he worked until his retirement in 2006. He is the author of 100 Ranger Greats: Superstars, Unsung Heroes and Colorful Characters (Wiley, 2009) and Game of My Life: New York Rangers (Sports Publishing, 2006). He passed away in January 2010.

Upon receiving his award, Burke recalled Halligan showing him around Madison Square Garden when Burke, then a student at Rose Hill, was the sports information director at Fordham and the Rams were set to play a few games at the arena.

“He introduced me to everyone in the chain of command at the Garden,” Burke said. “He didn’t have to do that, but he was such a lovely and kind man. I’ll never forget that.”

More than 100 people attended the luncheon, which was put together by Cirillo Management, a sports and entertainment company specializing in public relations, marketing and promotion, community relations, and special event management. Sal Marchiano, FCRH ’63, served as master of ceremonies.

“There wasn’t a cause closer to John’s heart than Fordham,” Marchiano said. “He would have been proud of today’s event.”

Proceeds from the event help fund the John Halligan Memorial Scholarship, awarded each year to a Fordham junior or senior majoring in communication and media studies. A committee—Friends of John Halligan—determines its recipient.

“That’s what it’s really about,” said Burke. “If you’re given something in life like I was, you have to give back. You want to do the right thing for Fordham.”

For more information and to make a gift to support endowed scholarships, visit www.fordham.edu/campaign.