In a ceremony held at the Lincoln Center campus, the group presented Feerick Center founder and director Professor John D. Feerick and executive director Dora Galacatos, LAW ’96, with a check for $100,000. The center will use the funds to expand its involvement with the Dilley Pro Bono Project in its efforts to assist asylum-seeking women with children detained in the South Texas Family Residential Center, a U.S. Immigration and Customs Enforcement facility in Dilley, Texas.

Since March 2016, the Feerick Center has partnered with the student-run group Immigration Advocacy Project to send 58 law student volunteers on 7 trips to Dilley, where they have provided legal representation to families seeking asylum in the United States.  An additional 20 other volunteers (including Fordham Law School alumni and staff) have served on 4 other trips. 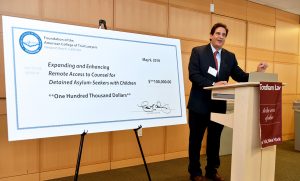 Matthew Diller, Dean of Fordham School of Law, lauded the Feerick Center and the American College of Trial Lawyers at the check presentation ceremony. Photo by Dana Maxson

A large number of the clients are women and children fleeing countries with extremely high murder rates, such as Honduras, El Salvador, and Guatemala. Volunteers explain the process of applying for asylum, listen to clients’ stories, and help them prepare for interviews with asylum officers.

Galacatos said the need for resources has never been higher. With 2,400 beds, the Dilley facility is the largest immigration detention center in the country, and a recent census revealed that it’s nearly full, with 2,200 residents currently detained there.

“I’ve been doing this for two years, and I’ve never seen it that high. There just aren’t enough people going down there to make sure every client who asks for help it gets it,” she said.

She and her partners with the Dilley Pro Bono Project plan to use the funds to hire expert consultants and some time-limited grant-funded staff and to purchase training materials and webinars. She said she’s grateful for the support of the American College of Trial Lawyers, which promotes the importance of fair administration of justice.

Galacatos said the Dilley Pro Bono Project (previously called the CARA Pro Bono Project) has been devoted to this idea since its founding and that it is an ideal example of it in action. When the first family detention center opened in 2014 in Artesia, Mexico, there were no lawyers there to assist detainees and only 46 percent of asylum seekers were determined by officers to have credible fears of being in harm’s way in the country they were fleeing. By contrast, the vast majority of Dilly project clients are successful—well over 96%.

“My job as a lawyer, and our responsibility as officers of the court, is to promote due process, and make sure everyone has a fair opportunity to make their claims,” she said.