skip to main content
Return to Fordham University
You are at:Home»Inside Fordham»Dolan Speaks on Law and Religion

Cardinal Timothy M. Dolan made a stop at Fordham School of Law just three-and-a-half weeks before his elevation to deliver the inaugural address at “Law and the Gospel of Life,” sponsored by the school’s Institute on Religion, Law and Lawyer’s Work. 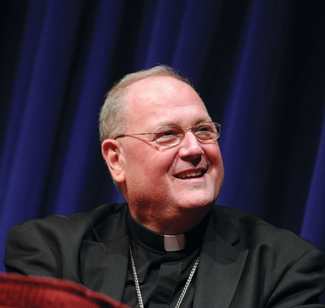 Former Archbishop Dolan was elevated to Cardinal
on Feb. 18.
Photo by Chris Taggart

Speaking on Jan. 24, the Cardinal (then Archbishop) said that the dignity of human life must be at the center of all man-made laws if society is to strike harmony with natural law.

He invoked Pope John Paul II’s encyclical Evangelium Vitae, written 17 years ago, saying that it speaks not just to Christians, but to “all people of good will” on the contrast between a culture of death and a culture of life, the archbishop said.

In modern political and legal theory, religion has been set aside from public policy discussions and law, in favor of secular arguments that are based on shifting values, or “drifting dunes of utility, convenience, privacy, and self-interest,” he said. Such a culture constructs laws that lead to the devaluation of human life, whether it be through abortion, infanticide, contraception, war, or poverty.

This runs contrary to the concept of “natural law,” an objective truth that recognizes all human life as sacred, and thus meriting legal protection.

“In the utilitarian view that dominates our age, the principle that human life is an end in itself, not a means to an end, is always subject to a calculation that would justify harm to another—if we deem it to produce enough of a benefit to ourselves,” Cardinal Dolan said.

“Pragmatism, utilitarianism, and consumerism are fancy vocabulary words for the passionate drive forhaving and doing,” Cardinal Dolan said. “(But) life is basically about being, and the law’s most noble purpose is to safeguard the ‘being’ of life from the rawest preferences for having and doing.”

Although the Archbishop joked that he would answer questions on “anything but my income taxes,” the moderator said he would not pose the “more difficult and pointed” questions that some audience members had submitted.

The Cardinal acknowledged the frustration that some faculty members can face when students see no place for religion in classes on topics such as bioethics.

“One of the things that is frustrating is that the natural law approach is automatically thought to be synonymous with Catholic teaching, but it is not uniquely Catholic,” Cardinal Dolan said. “Some of its greatest proponents—Aristotle, Cicero—never even heard of the Catholic Church.

“You can tap into your pedagogical toolbox and take this out of a Catholic context,” he said. “This is a human thing . . . an examination of conscience.”

The newly elevated Cardinal has promised to return to Fordham following his elevation.

“Any opportunity to visit Fordham is an occasion I relish,” he said.

Former Archbishop Dolan was elevated to Cardinal on Feb. 18.