skip to main content
Return to Fordham University
You are at:Home»Law»Disability and Diversity Conference Highlights University Scholarship
(Above) Rebecca Sanchez presents research on the intersection of deaf and modernist studies. Photo by Dana Maxson.
Around the world today people are commemorating the International Day of Persons With Disabilities to highlight the need for a more inclusive and accessible society for all.

At Fordham, the celebration began a day early with an interdisciplinary symposium spotlighting faculty and students research focused on disability. The Dec. 2 event, “Diversity and Disability: A Celebration of Disability Scholarship at Fordham,” also marked the 25th anniversary of the Americans with Disabilities Act (ADA).

Matthew Diller, dean of Fordham School of Law and the Paul Fuller Professor of Law, discussed how disability law influences people’s participation in the workforce. This participation, Diller said, is socially as well as economically important, because work signifies social status.

“Work is central to how we think about people, their role in society, and whether they are successful members of that society,” Diller said. “There is a social expectation that you should be in the workforce, and if you’re not, then you’re an underperforming member.”

Not everyone can fulfill that expectation, Diller said, so the law allows for some people to be excused from work owing to certain situations or conditions, such as a disability. Some people, however—including people with disabilities—are excluded from work altogether as the result of prejudice, discrimination, or other barriers that prevent them from fully participating in society.

“If we judge social worth by whether someone works, but then exclude some people from the workforce, then we’re inherently denigrating their social worth,” he said.

The value of the ADA, Diller said, is that it focuses on creating systems that integrate people with disabilities into the workforce, thereby restoring their right to work.

However, there remains room for improvement, Diller said. For instance, up until Congress substantially amended the law in 2008, courts regularly impeded the ADA’s enforcement by making the definition of disability extremely narrow. Many plaintiffs seeking excusal from or accommodations for work lost their cases on the grounds they were not disabled—an approach Diller said was “misguided.”

Graduate student Xiaoming Liu presents her research at the Celebration of Disability Scholarship on Dec. 2.
Photo by Dana Maxson

Fountain is doing research with scientists from Columbia University and the Centers for Disease Control and Prevention on the sociological aspects of autism, particularly how a noncontagious illness has reached epidemic proportions and who is being most severely affected by it.

Autism, the group has found, is more prevalent in children of wealthy and well-educated parents, and that wealth and education play a role in how quickly and to what extent an autistic child improves developmentally.

Sanchez discussed her new book Deafening Modernism: Embodied Language and Visual Poetics in American Literature (New York University Press, 2015), which argues that “deaf insight,” that is, the “embodied and cultural knowledge of deaf people,” is not an impairment, but an alternative way of thinking and communicating.

She offered the example of Charlie Chaplin’s 1936 silent film Modern Times. Chaplin, Sanchez said, deliberately chose to avoid the new “talkie” technology because silent pictures allowed for “a universal means of expression.” The plot of the film itself, she said, bespeaks the dangers of forcing people to express themselves in homogenized ways. 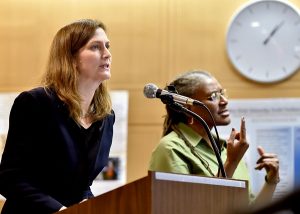 Elizabeth Emens of Columbia Law School was the keynote speaker at the Celebration of Disability Scholarship.
Photo by Dana Maxson

The event was sponsored by the Office of Research and by the Faculty Working Group on Disability, led by Sophie Mitra, PhD, associate professor of economics. The group connects Fordham faculty who are researching some aspect of disability.