skip to main content
Return to Fordham University
You are at:Home»Law»Challenging Conventional Wisdom on Mass Incarceration

On February 7, Fordham Law School Professor John Pfaff led a three-person panel in discussion of justice system reform within the United States—the topic of his book Locked In: The True Causes of Mass Incarceration – and How to Achieve Real Reform, which was released the same day.

Joining Pfaff in the discussion were Adam J. Foss, co-founder of Prosecutor Impact and a visiting senior fellow at Harvard Law School, and Phillip Atiba Goff, the Franklin A. Thomas Professor in Policing Equity at John Jay College and the co-founder and president of the Center for Policing Equity. The trio framed their discussion around Pfaff’s book, which challenges conventional wisdom about the origins of the United States’ unprecedentedly massive prison population and the reforms proposed to reduce it.

“Democrats and Republicans can’t even agree if it’s rainy or sunny, but we can agree that we need to reduce our prison populations,” said Pfaff. “Newt Gingrich, Corey Booker, the ACLU, and the Koch brothers lined up on this issue. Yet in this—being one of the few areas where there’s a bipartisan consensus—our success is fairly minimal.”

In Locked In, Pfaff argues that received ideas concerning mass incarceration have prevented meaningful action. He pointed to the example of nonviolent drug offenses, which, the public views as an essential driver of mass incarceration, but which, Pfaff’s data show, account for a mere 16 percent of the U.S. prison population overall. 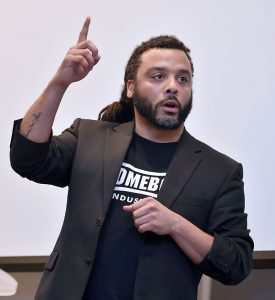 Though he advocates justice system reform, Pfaff argues that the explosion in the U.S. prison population between the 1970s and the present owes not to the “dramatic stuff” of public discourse but rather to commonly overlooked facets of the justice system.

Pfaff says that public prosecutors, who decide which crimes to charge defendants with, have increasingly chosen since the 1990s to bring felony charges rather than significantly less severe misdemeanor charges. Since prosecutors, not judges or juries, typically negotiate plea bargains, prosecutors often choose how long defendants will spend in prison.

Foss and Goff also picked out prosecutorial discretion as a key driver in increasing the U.S. prison population. Calling on his eight years of experience as a prosecutor in the Juvenile Division of the Suffolk County District Attorney’s Office, Foss said prosecutors often mete out punishments with little understanding of how those punishments will affect the communities from which defendants have been drawn.

“Every single day, around this country, thousands and thousands of times, prosecutors are conducting heart surgery on neighborhoods that they know nothing about,” Foss said. 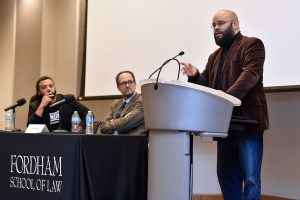 “The place you get in trouble is where the relationship between law enforcement and the criminal justice system segregates the pain of enforcement from the pain of victimization,” he said. “And that’s what the book talks about, in a better way than any book prior.”

Pfaff himself expressed his hope that Locked In would help the cause of criminal justice reform by providing new issues on which to take action. He said that resolving misunderstandings about the criminal justice system was the first step towards reform.

“One of the conservative critiques of the Black Lives Matter movement is that they somehow don’t care about crime,” he said. “That’s insane. Black Lives Matter emerges from those groups that feel both the benefit from crime reduction and most closely feel its costs as well. And they’re telling us that these costs are out of balance, that this is not the way you approach this problem.”