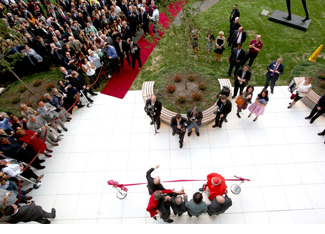 “Sapientia Aedificavit Sibi Domum. Wisdom has built herself a home,” said Joseph M. McShane, S.J., at the ribbon cutting for the new Fordham Law building at the Lincoln Center campus.
Below: U.S. Supreme Court Justice Sonia Sotomayor was
“pleased to be here” among so many colleagues.
Photos by Dana Maxson

The west side of Robert Moses Plaza overflowed with smiling faces on Sept. 18, as nearly 1,000 Fordham Law faculty, administrators, students, and alumni joined dignitaries and friends to celebrate the ribbon cutting of the college’s new law school facility.

“Sapientia Aedificavit Sibi Domum. Wisdom has built herself a home,” said Joseph M. McShane, S.J., president of Fordham. “And what a home it is!”

Edward Cardinal Egan, Archbishop Emeritus of New York, offered the benediction, calling the Pei Cobb Freed & Partners–designed structure “a radiant new abode” as it reflected sunlight onto the dais during the ceremony.

Loretta Preska, LAW ’73, Chief Judge of the United States District Court for the Southern District of New York, served as master of ceremonies. 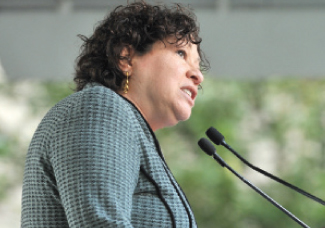 Justice Sotomayor, a native of the Bronx who received an honorary degree at Fordham’s 169th Commencement, noted that in May 1960, Chief Justice Earl Warren spoke at the cornerstone ceremony for the law school’s first Lincoln Center home.

“I am delighted to be here today, humbled by the presence of Cardinal Egan, delighted to be joining old friends like Mike (Bloomberg) and the chief judge, but not the least, Father McShane, whom I adore.”

“You’ve given a special spirit to this University, and I’m so pleased to be here. Fordham never ceases to amaze me.”

Bloomberg, who was instrumental in clearing the way for the construction of the building begun in 2011, called it a special day for the legal profession, justice, and for New York City. He noted that, as universities are key drivers of innovation and progress, their presence helps keep the city competitive.

“Our administration worked hard to help local colleges and universities grow, and one of the most important successes came right here at Fordham. The rezoning that helped make this new law school possible will benefit the city, Fordham, and young people for generations to come,” he said.

“Fordham is one of the city’s shining stars, and the law school gave our administration some of our stars.”

Reiterating the idea that “wisdom has found a home,” Father McShane noted that the new building is the ninth home for the law school since its inception 109 years ago.

“In spite of the changes both in its leadership and its location, and in spite of the ways in which the legal profession has evolved over time, it has always been guided by a unique vision, a vision that has enabled it to achieve greatness on its own terms,” he said.

“It has remained a school that has offered its students a rigorous education in the context of a strong community, and an education that challenges them to live their personal lives with great integrity and to devote their professional lives to the service of others.”

Martin recalled that when then-U.S. Attorney General Robert Kennedy spoke at the dedication of the law school’s previous home, he reminded the crowd that “men and women mean more than mortar and masonry,” and that “walls of glass and granite need to be moved by qualities of intellect and spirit to give them meaning and purpose.”