skip to main content
Return to Fordham University
You are at:Home»Inside Fordham»25th Amendment to U.S. Constitution Had its Roots at Rose Hill 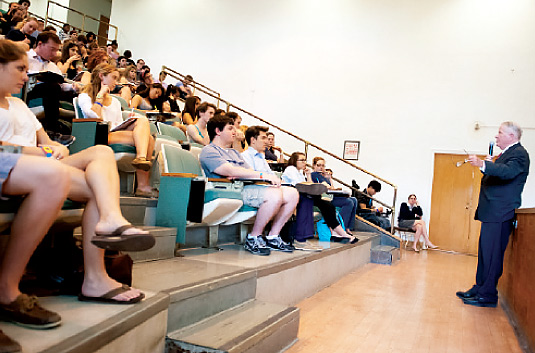 In 1958, John D. Feerick, a senior political science major, was elected vice president of the campus student government. When the winning candidate for president resigned two weeks later for medical reasons, there was a great deal of consternation among the student body, with many questioning how a person could run for office while aware that they had such a condition.

A reelection was demanded, but Feerick pointed out that under the constitution approved by the students, there was no provision for it. His view was upheld.

“I became fascinated by constitutions,” Feerick, Norris Professor of Law and former dean of the Fordham School of Law, told a student pre-law symposium on Oct. 2. “I fell in love as a political science major with reading the Constitution, and understanding the Constitution as best I could.

“I carried that into law school, and as I was graduating from Fordham Law School three years later, I recognized an issue that existed in the United States at the time, which was, how do we handle the disability of the president of the United States?”

Although Article 2 of the Constitution addresses what happens when a president dies, is impeached, or resigns, it is silent on the issue of a president who is temporarily disabled, said Feerick.

“A press article I read at the time indicated that there was a major issue [over it], and I said to myself, ‘Gee, this is what we had to deal with at Fordham College,” he said.

He published an article laying out his prescriptions for addressing the issue. Although it was considered at the time to be an esoteric pursuit, just one month after it was published President John F. Kennedy was assassinated.

That set the stage for the 25th Amendment’s passage four years later. Today, Feerick is one of 11 people credited with writing the amendment, which clarifies the rules for succession to the presidency and establishes procedures both for filling a vacancy in the office of the vice president, as well as responding to presidential disabilities.

Feerick said he was proud that its existence helped smooth the 1973 transition caused by the resignations of Vice President Spiro Agnew and President Richard Nixon.

“That was a time of tremendous fury and concern for the country and its stability, but the 25th Amendment operated in a way to provide stability,” he said.

“Every provision of the Constitution . . . has a history and an importance to giving us the kind of liberty we have and enjoy in this country.”

Feerick’s talk was part of a belated celebration of Constitution Day at Rose Hill. Earlier in the afternoon, during a roundtable discussion with pre-law students, he reiterated the “Four H’s” speech that he emphasized as dean: Honesty, Hard work, Helping each other, and Harmony

He urged students not to be discouraged by the state of the legal field today, which is in great flux. Having spent a great deal of his career working in public service, and having founded a center for social justice at the law school, Feerick also challenged students to volunteer for just causes.

“Conflict is not going away; there’s nothing in the last 2,000 years-plus that suggests that,” he said. “I see lawyers as increasingly important in helping people [resolve]conflict.”