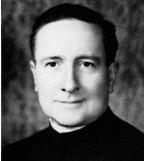 In February 1922 at Fordham, a young a Jesuit scholastic with a passion for theatre kicked off a new activity to train freshmen in the dramatic arts.

Impressed with the work of the students in his theatre workshop for freshmen, he arranged for them to stage a one-act play contest in the University auditorium.

The students wrote and directed the plays and staged them with the help of Fordham’s Mimes and Mummers. The contest—hailed by The Ram four years later as “one of the most important events of the year”—helped inaugurate a 40-year tradition of one-act plays at Fordham, culminating in the annual Jesuit Intercollegiate One-Act Play Festival, which ended in 1962.

The contest was but one part of the dramatics legacy established by that young Jesuit, Robert I. Gannon, S.J., who also wrote a manual for one-act plays. Later, as president of Fordham, he built a theatre in Keating Hall as part of his emphasis on dramatics, which had been fundamental to Jesuit education from its earliest days.