skip to main content
Return to Fordham University
You are at:Home»Fordham Magazine»Alumni News»Young Fordham Alumni Get Inside Scoop on Career Advice 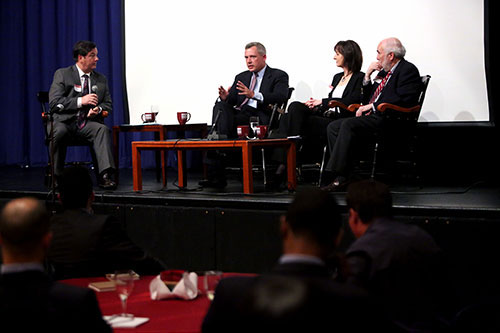 Leaders in the fields of law, defense, and consulting shared their expertise with recent Fordham graduates in a round table discussion on Thursday, May 22.

Spring Executive Leadership Series: Inside the Executive’s Studio, was presented by the office of Development and University Relations at Fordham’s Lincoln Center campus as a way for recent graduates to learn what it takes to pursue successful careers from the University’s seasoned President’s Council members..

It was hosted by Thomas Maier, FCRH ’78, journalist, historian, and producer of the Showtime series Masters of Sex, which is based on his biography of researchers William Masters and Virginia Johnson.

Sitting in the interviewee chairs were:

Among the topics the panelists addressed were the importance of finding a mentor, how their industries define success, and what failures they’d overcome. They also reflected on what they see as the strengths and weaknesses of the millennial generation.

In reflecting on his career, Kelly noted that his life changed very quickly when he was drafted into the Army 1970. The experience soured him on the Vietnam war, and although it was difficult, he spoke out about it in lectures at the Army War College. But among the fans he won for his talk, was Hermann Eilts, who was then a deputy commandant and diplomatic adviser at the college. It would prove to be an important connection.

“I was in his office the following spring, when he got a call from Henry Kissinger, offering him a job to be the ambassador of Egypt. He was the ambassador who facilitated the Camp David Peace Accords,” he said.

“You never know what’s going to happen, but people step up if you do your job. If you take a chance, somebody’s going to see it, and give you an opportunity.”

All the panelists agreed on the value of a mentor. Gebauer suggested students look for one with three qualities:

-Someone who is confident enough to share their mistakes with you, so you can learn from them.
-Someone you can relate to, via similar cultural background, gender, or common affiliation.
-Someone who doesn’t want to create another version themselves.

Maier stressed the possibilities that can come from simply asking a person for advice. Even if you know you’re not ready to work at their company right now, it can pay off to get to know them now.

On the question of generational differences, Bowe lauded the millennial generation for being less committed to preconceived notions and more flexible about what’s possible. But he lamented what he found to be a sense of comfort and passivity that often translates into lack of responsibility and initiative.

“It’s almost like you have to shove them out the door,” he said.

“My favorite is the guy who came in and said ‘I just don’t want you to be unhappy with my work, and I looked at him and said ‘Well I’m really not happy with your work now, because I’m doing it.’”

Gebauer disagreed, and noted that working in human resources, the topic often comes up. Baby Boomers often forget that a 22-year old today is more like their own children and their 22-year old self than like them today. If the millennial generation is different, it’s that global connectedness has both opened up more opportunities for them and exposed them to more competition.

“You have the opportunity to see the rest of the world in real time, and understand different cultures readily and get a diversity of experience that will enrich your development opportunities,” she said.

“I think your inventiveness, your creativity, and your willingness to challenge compliment that.”