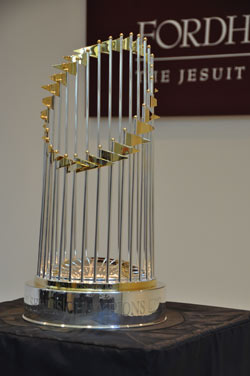 Fans of Fordham Athletics could get up close and personal with the Yankees’ World Series trophy.
Photo by Gina Vergel

The Fordham Athletic Hall of Fame ceremony contained an added element this year: an appearance by the New York Yankees’ 2009 World Series trophy.

The championship hardware from the Yankees’ 27th title was on display for fans to view and take photographs with at the Hall of Fame proceedings on Jan. 23, which were hosted by Yankees broadcaster Michael Kay (FCRH ’82). Later that day, representatives from the Yankees transferred the trophy to the Rose Hill Gym for the men’s basketball game.

Several Fordham connections helped to bring the trophy from Yankee Stadium up the Major Deegan Expressway, across Fordham Road, and onto campus.

Ryan Ruocco (FCRH ’08) of the Yankees’ video team thought of the idea and brought it to Fordham Executive Director of Athletics Frank McLaughlin (FCRH ’69). The Yankees’ assistant director of corporate/community relations, William “Rocky” Halsey (FCRH ’99), and director of stadium tours, Tony Morante (FCRH ’79), escorted the trophy to their alma mater.