skip to main content
Return to Fordham University
You are at:Home»Inside Fordham»Writers Recall the Profound Influence of a Catholic Childhood 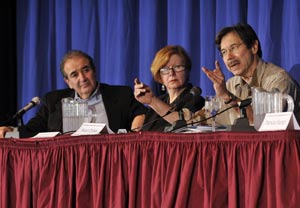 From left: Catholic writers Lawrence Joseph, Valerie Sayers and Stuart Dybek at Fordham on Dec. 9. Photo by by Leo Sorel

Novelists and poets cited their Catholic childhoods as having had a profound influence on their creative works at a panel discussion on Dec. 9 sponsored by Fordham’s Center on Religion and Culture (CRC).

“The influences of Catholicism can be found in the vocabulary, rhetorical structures and syntax and the very substance of every poem I write,” said Lawrence Joseph, a professor of law at St. John’s University and author of five volumes of poetry. Joseph listed several artists who drew heavily from their Catholic roots, including novelist Don DeLillo (FCO ’58), short-story author Flannery O’Connor, film director Martin Scorsese and Pulitzer Prize-winning historian Gary Wills.

Scorsese, Joseph said, found “a strong sense of the oscillation between the sacred and the profane” in Catholicism and Wills called the religion “its own field of tangible and intangible truths . . . not a bad world for a poet to have been born into or to have grown up in.”

The discussion, titled “The Indelible Mark: The Writer and a Catholic Childhood,” was preceded by the authors’ individual readings of their works. Panel member Stuart Dybek, distinguished writer in residence at Northwestern University and a 2007 MacArthur Fellow, read sections from his short storyThread, about a fourth-grade boy who accidentally swallows a gold thread from his Knights of Christ uniform sash during Mass and suddenly realizes he has broken his fast.

As he stands before the priest for communion, he realizes that receiving communion without having fasted would be a mortal sin; he doesn’t know what to do.

Dybek outlined two approaches that Catholic writers can take toward their religious upbringing. Writers, he said, can embrace the mythos of Catholicism, so that their own writing mirrors the religious in its primitivism, incantation and metaphor. The second approach, he said, is writing from a point of view of “the rational mind realizing how the faith of religion is not living up to itself.”

“In my story, the moment the kid loses his faith is when he realizes the ridiculous stuff he has to go through because he’s swallowed a thread,” Dybek said.

He cautioned, however, that it’s hard to put religious influence into categories. He cited several Jewish writers whose work inspired him to write some of his best work on his relationship to his Catholicism.

“If I had to divide things up, though, I’d divide it between fundamentalism in all religions and liberalism,” he said. “[Approaches] to religion have more in common with each other than individual religion.”

Patricia Hampl, a memoirist and the McKnight Distinguished Professor at the University of Minnesota, moderated the event. Hampl questioned whether Post-Vatican II writers would experience the same nostalgia for Catholicism as previous generations of Catholic writers, and whether a strong Catholic identity was beginning to slip away in younger generations.

Panelist Valerie Sayers (FCLC ’73), author of five novels and recipient of the Pushcart Prize for fiction, said that creative writers would always step around the rational to get to the religious mystery of something in their work.

“When I was a child, I thought it was very clever [of the Catholic Church]that whenever you had a question, it was a ‘mystery,’” she said. “What a great church.”

“But I embrace it now,” she added.