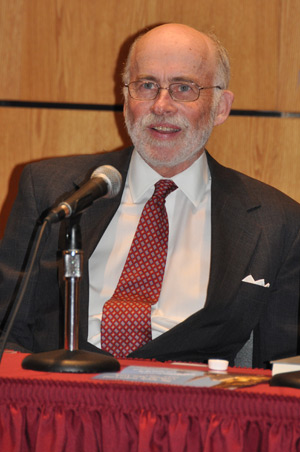 The popular notion that the Tammany Hall political machine existed only to subvert democracy and enrich its top members is false. So said a panel of writers and historians who spoke on April 21 at Fordham.

While Tammany was corrupt, the organization procured food, jobs and other assistance for new immigrants who were shunned by established society, the panelists said at “Big Apple Politics and Catholic New York: 1845-1945,” the 12th annual Russo Family Lecture.

No one can truly understand the nature of Tammany without viewing it in the context of the Irish Famine of 1845 to 1851, said writer Peter Quinn, author ofThe Banished Children of Eve (Viking Press, 1994).

“The Famine imprinted the lesson that the first priority of power is getting it and keeping it out of the hands of those who would use it against you,” Quinn said.

The calamity killed as many as 1.5 million Irish and forced the emigration of roughly two million more. It occurred when Ireland was controlled by Great Britain, which withdrew its humanitarian support in the middle of the crisis.

Quinn pointed out that Tammany was built in opposition to the principles of free-market capitalism, which were used by Britain to abdicate its responsibility for the starving Irish.

The Famine immigrants who brought Tammany to power “could not theorize out of existence the people who couldn’t make it on their own, or chalk off their fate to the gods of macroeconomics,” Quinn said. “To them, government was the solution to poverty and powerlessness—not the cause.”

If the organization did so much good, then how has it become synonymous with corrupt American politics when many people and groups from the same era were just as crooked and far less benevolent?

The answer, according to historian Terry Golway, is the positive portrayal of abolitionists and their offspring, progressive social reformers, who set about defeating Tammany in the Gilded Age.

“Many historians ignored the anti-Catholicism of the abolitionist movement because they wanted to portray these people as heroes,” said Golway, author of Irish Rebel: John Devoy and America’s Fight for Irish Freedom (St. Martin’s Griffin, 1998). So reformers have been lionized at the expense of machine politics.

“Tammany was courting African Americans at a time when ‘Big P Progressives’ in the South were shutting down African-American avenues to equality,” he said.

Indeed, reformers were not the great defenders of democracy that many believe, said panelist Frank Barry, author of The Scandal of Reform: The Grand Failure of New York’s Political Crusaders and the Death of Nonpartisanship (Rutgers University Press, 2009).

As an example, Barry pointed out that reformers proposed an amendment to the New York state constitution in 1877 that New York City should be run by finance boards consisting solely of landholders.

“That would have disenfranchised roughly half of the city,” he said.

Conversely, Tammany politicians in Albany pushed through sweeping social welfare reforms in the early 20th century that ameliorated a wide swath of society’s ills, Barry said. Those reforms were brought to the entire nation when Franklin Roosevelt incorporated them into the New Deal.

Another reason that Tammany remains largely misunderstood is because its leaders never told their own stories, according to James T. Fisher, Ph.D., professor of theology and American studies at Fordham and author of On the Irish Waterfront: The Crusader, the Movie and the Soul of the Port of New York (Cornell University Press, 2009).

“The Tammany bosses weren’t back-slapping storytellers. They were businessmen,” Fisher said. “E.L. Godkin said that there were only three things that Tammany feared—honest work, the penitentiary and biography.

“It’s because of that code of silence, which was so much a part of second-generation Irish-American culture, that the full biographies of these Tammany bosses and their organization may never be known.”