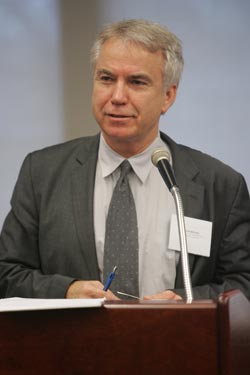 Darryl McLeod, Ph.D., says that immigrants face an increased risk of violence due to carrying around large sums of cash.
Photo by Bruce Gilbert

Leaders from microfinance organizations and credit unions in New York and abroad teamed up with Fordham scholars at a workshop on the financial trends of migrants and the families they leave behind.

The event, “Migration, Remittances and Financial Inclusion,” was held on Nov. 14 at the University’s Rose Hill campus.
It was hosted by Fordham’s Center for International Policy Studies (CIPS), a research center created four months ago to combine the expertise and resources of the Graduate School of Arts and Sciences, Graduate School of Business and School of Law.

“Channeling these funds through microfinance and community development credit unions can potentially greatly enhance small business and job creation in rural Mexico and the Dominican Republic as well as in the Bronx,” McLeod said.

According to figures released last year by the World Bank, remittances accounted for about a third of total external finance worldwide in 2005. A report released by the World Bank this past July shows that remittance flows to developing countries were $251 billion in 2007, up 11 percent from 2006.

That means there are vast sums of money flowing from immigrants in the United States to their home countries. But that doesn’t mean that the system of sending money abroad is perfect, McLeod said.

“At both ends of the remittance corridor, immigrants find themselves excluded from the formal financial services we take for granted,” he said. “The result is high fees and great risk, as immigrants are known to carry large amounts of cash and are often reluctant to report crimes they witness.”

“It costs an average $17 plus the risk of being robbed for someone living in the sierras—four hours away from a major city,” he said. “That’s a lot of money. If you receive $200, that’s 10 percent plus the risk of losing it all.

Berthaud also pointed out the negative effects remittances have on Mexican residents, who may grow to depend on them instead of finding a better way of life.

“The money is not circulating because it’s under a mattress, and if the remittances stop, the young people who depend on them migrate themselves, leaving an aging population in the sierras where they once lived,” Berthaud said.

The workshop included presentations from organizations working to improve financial literacy and provide credit and banking services for immigrants in New York and the surrounding area as well as residents of Mexico and the Dominican Republic.

The afternoon portion of the daylong event, which was hosted by John N. Tognino (FCLS ’75), chairman of the Fordham Board of Trustees, focused on efforts by Yale University and community organizations to promote the use of municipal identification cards. The city of New Haven, Conn. began issuing the cards in 2007 to help immigrants gain access to bank accounts and to make them more comfortable reporting crimes to local police.

Presently, CIPS is conducting a survey of Mexican immigrants from Guerrero and Puebla to better understand their use of financial services to cash checks, transfer funds to Mexico and pay bills, McLeod said. He is co-directing the project with Fuentes.