skip to main content
Return to Fordham University
You are at:Home»Inside Fordham»Working to Bridge Culture Gap Between U.S. and Chinese Students 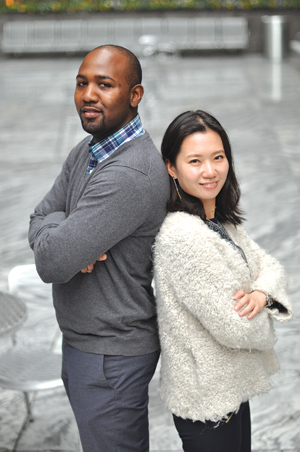 No one wants to feel foolish when asking a question, especially when it seems like everybody else in class gets it. Now imagine that you were raised to not ask questions or challenge people in positions of authority. Now imagine that you’re asking that question in another language, and in a foreign country. Now imagine that the native students are barreling ahead in the class discussion in local dialect.

Welcome to being a Chinese student in America.

“I’ve been a student in China and I’ve been a student in the States, and now I’m a teacher here,” said Yanjun Li, Ph.D., associate professor in the Department of Computer and Information Sciences. “In China, the professor has a higher authority. No one challenges him and he is 100 percent correct, that’s the tradition. And if you try to question, you aren’t showing respect. That’s the culture.”

Li (see pg. 4 for more on Li’s research) said that her transition to the United States as a student wasn’t an easy one, but that she prevailed because—finally—she learned to ask the questions she wanted to ask.

“In China the professor’s attitude was ‘I show you the conclusion! Memorize the conclusion. That’s it!’” said Li, who makes a point of telling her students to question her as frequently as necessary. “But you always have questions in your mind: ‘Why is this so? Why is this correct? Why did it happen this way?’”

The pressure to stay quiet persists among many Chinese students when they come to the States, Li said. “We think that if no one is asking a question and I ask, then I’m the silly one,” she said.

Li gives voice to a growing issue in universities throughout the country as more students from China come to the United States to be educated at world-class institutions like Fordham.

“In Beijing or Shanghai it’s every family’s dream to have a child go to the United States to attend college and to understand the culture,” said Kelsey Qianqian Si, president of the Fordham International Students Association at the Graduate School of Business Administration (GBA). “When we get here at first we think the language is a problem, but really it’s the culture.

“American students understand what I am talking about, but they respond really fast, and often it’s hard to follow. As Chinese students, when we face this kind of problem we keep silent.”

Verbal or emotional restraint can sometimes be misconstrued as a character trait, said Jeffrey Ng, Psy.D., the University’s director of counseling and psychological services.
“It’s important to not make premature or inaccurate attributions for why a student may be behaving a certain way, like ‘They’re shy,’ or ‘They’re not interested in participatory learning,’” said Ng, who is a first-generation Chinese American. “It could also be that the student comes from a culture where the emphasis is on self-control, self-discipline, or the valuing of the group over the individual.”

“If we really want to embody cura personalis, then we need to think of the whole student—including their culture,” said Ng.

Paul said that cultural awareness is vital across the University, especially since Fordham hopes to engage each and every one of its graduates through its Office of Alumni Affairs. And the international alumni culture that Fordham is nurturing plays out across many dimensions—social, spiritual, and financial.

“Giving back is a much bigger picture than just money,” said Chloe Chao, GSB ‘13, who said that alumni networking helped her to find a position as a consultant for Cushman & Wakefield in Shanghai. “I will pass on the spirit to others and help them.”

Qianqian Si said that it’s important to cultivate future international alumni while they’re in school, she said—lest they begin to feel that the only reason that they are here is to pay tuition.

It is also important to cultivate diversity, which is key to helping international students acclimate, she said.

For all the workshops and training, sometimes it’s just a matter of making an effort to say hello. GBA student Tyrell Peebles said that, even as a native New Yorker, he empathized with Chinese and other international students. He grew up in public housing and said that he, too, had to learn how to navigate middle-class American culture.

“If it’s rough for me as an African American,” he said, “how hard is it for students from a totally different culture, with a different language, where everything is new?”

Peebles noticed that Chinese students would sit together, so he began sitting right down with the group and introducing himself.

“And that would get them to relax.”