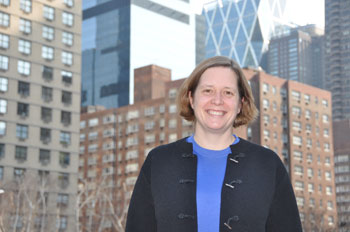 Anne Fernald, Ph.D., says that Virginia Woolf loved living in London, and wrote extensively about it. She is coordinating “Woolf and the City.”
Photo by Janet Sassi

This June, Fordham will host the 19th Annual International Conference on Virginia Woolf at its Lincoln Center campus, attracting scholars from all over the world for a four-day Woolf extravaganza.

It is being organized by Anne Fernald, Ph.D., associate professor of English.

Fernald became a Woolf enthusiast when she was a graduate student in 1990. “I totally fell in love with her and that was it, I was done,” she recalled. “I knew I was writing my dissertation on her.”

Since then, Fernald has written often on Woolf and on modernism. In Virginia Woolf: Feminism and the Reader (Palgrave, 2006), Fernald chose to deconstruct not Woolf, the writer, but Woolf, the prolific reader. Using Woolf’s letters, diaries and writing, Fernald traced Woolf’s feminist literary development through her relationship to four authors: one romantic, one Greek, one early modern and one 18th-century.

“Woolf was probably one of the most important feminists of the 20th century, but if you looked at her

activism during her life, she played a tiny role,” said Fernald, who noted that during Woolf’s day, women came together in a struggle for voting rights. “She’s not a game changer on the right to vote at all. But she is a huge game changer in terms of feminist theory, and what she did was really revolutionary.”

For one, Woolf’s life and writings influenced the academy to think about the history of women’s literature as distinct from the history of literature. As a result, Fernald said, a whole area of feminist literary scholarship blossomed in the latter 20th century.

Secondly—and of scholarly interest to Fernald—Woolf absorbed the works of other writers to develop her own unique feminist point of view, all the time honing her distinct literary voice.

One influence that Fernald studied is 18th-century British writer Lord Byron, a revolutionary and scandalous Romantic poet. Byron was a major celebrity in his day, and his untimely death in the battle for Greek independence against the Ottoman Empire ensured his posthumous reputation as a romantic martyr.

Woolf’s interest in Byron, Fernald noted, lay in her own fascination with fame: Woolf wanted to sell books but, like Byron, was ambivalent about marketing herself as a celebrity.

“Woolf thought very hard about the bitterness and frustration arising from all the opportunities that had been denied women in every generation prior to hers,” Fernald said. “A good woman in a pre-feminist world was chaste, pure, quiet and obedient. Woolf was hardworking and ambitious as a writer. She wanted money and fame, and achieved some during her lifetime.”

War was unpopular with the pacifist Woolf. Her writings on the works of Sappho, the passionate Greek poet from Lesbos, shed a different light on how to appreciate Greek literature. Traditional English audiences embraced its emphasis on war, death and grief, said Fernald. But by taking pleasure in the pure beauty of Sappho’s love poetry, Woolf advanced the idea that Greek classical writing did not have to be an “inculcation into the military,” said Fernald.

Woolf also recast the work of Sir Richard Hakluyt, editor of The Principal Navigations (1598) and other essays of travel, adventure and the New World. To her, the collection represented slightly comical accounts about failures, rather than its intended documentation of imperial posterity.

Yet Fernald traced some of the beautiful descriptions of the exotic locales to certain passages of Woolf’s own works, especially her novel about a young woman on a boat trip to South America, The Voyage Out (1915).

The journalist in Woolf delighted in reading London’s Old Spectator, a daily 18th-century social paper that mixed old-fashioned ideas with entertainment. Fernald quoted Woolf describing editor Joseph Addison’s publication, however, as trite: “perfect in the way a teardrop is perfect
. . . but not the River Thames.”

These influences converged to help create the iconic Woolf—reader, writer, observer and feminist—whose aura was tangible, who posed for photographer Man Ray, who appeared on the cover ofTIME, and who was part of the infamous Bloomsbury Group, a gathering of the day’s forward thinkers. By the 1960s, when Woolf’s husband, Leonard, published her diary, Fernald said the tumultuous era of Vietnam and sexual freedom was ripe for the resurrection of Woolf and her entourage.

“The (Bloomsbury Group) were like proto-hippies—sexually free progressive anti-war leftists,” she said.

“To have this group of pacifist, feminist, gay-positive people who lived 60 years earlier was a thrilling discovery.”

Besides writing nine novels and several short stories, Woolf penned dozens of essays on London life that were published in newspapers and magazines. She was a frequent contributor to the Times Literary Supplement, and, noted Fernald, one of its highest-paid. Woolf’s status as an observer of city life inspired Fernald to choose the conference theme of “Woolf and the City.”

“Woolfwrites a lot about what it means to be a Londoner,” said Fernald. “So this conference will focus on her relationship to the city.”

The conference will kick off on June 4 with talks and a staged reading of “Vita and Virginia,” a play starring Fordham student and Broadway actress Alison Fraser. Other highlights include a keynote address by journalist and essayist Rebecca Solnit, author of Wanderlust: A History of Walking(Viking, 2000), and plenary talks that explore how Woolf’s works apply to new urban sociological and literary theories.

“You can count on meeting some major thinkers,” said Fernald. “And at the same time the conference has a deep ethos of welcoming anyone who loves to read Woolf.”