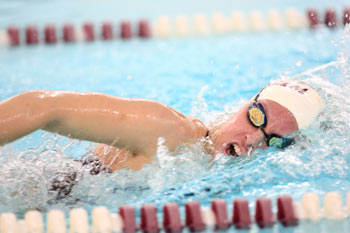 Megan McGorry placed second overall in the 1650 freestyle, with a school-record time of 16:58.64.
Photo courtesy of Fordham Athletics

When the Atlantic 10 released its preseason poll for women’s swimming and diving on Oct. 15, all of the pressure was on Fordham.

The team had been picked first by the league’s coaches.

On Feb. 20, Fordham lived up to its high billing by winning the league championship tournament in Buffalo, N.Y. The victory marks the first postseason Atlantic 10 championship title for any women’s sport at Fordham.

Over the last three days of the competition, Fordham and the University of Richmond were locked in a battle for first place, but it was the Rams—finishing with 676 points—who took home the crown.

The night of finals started in the 1650 freestyle, where the Rams had two scorers. Megan McGorryplaced second overall with a school-record time of 16:58.64, breaking the old mark by close to 10 seconds. Giulia Kaftan also scored in the event, placing 16th with a time of 17:52.94.

Up next was the 200 backstroke, where Brienne Ryan earned All-Atlantic 10 honors for the fifth time during this championship. She placed second with a time of 1:59.56. Earlier in the preliminaries, she broke the school record in the event with an NCAA “B” cut time of 1:58.42. Christina Cosentino also made her way into the “A” final, as she placed fifth with 2:02.63.

Despite the strong start in the first two events, Fordham found its lead dwindling; Richmond tied the Rams with 536 points following the 100 freestyle event.

Fordham still had a great showing in that event, however, with three swimmers in the “A” final and one in the “B.” Tressa Dunn led the charge as she placed second in the “AB” final in a school record time of 51.04 seconds, followed by Kelly Bunster in seventh (52.03) and Alexandra Alessi in eighth (52.53). Rounding out the finals, Kellie Lyver was fourth in the “B” final (12th overall) in 52.42 seconds.

Fordham then regained the lead thanks to Nicole Marshall, who placed second in the 200 breaststroke in a school record time of 2:18.33, breaking her old mark of 2:19.25, set last year.

Leading by nine points, Fordham entered their strongest event with four finalists in the 200 butterfly. The “B” final saw Kim Bouton win the heat in a time of 2:08.78, while Katelynn Gray was third in 2:09.27.

In the “A” final, Fordham pulled off its second one-two finish of the championship, as Courtney Collyer defended her title in the 200 butterfly with a time of 2:01.52, followed by Caitlin Napoli in second place with 2:02.17.

With the two heat wins, Fordham took a 48-point lead into the final two events—the three-meter dive and 400 freestyle relay.

In the three-meter dive, all three Ram divers: Andrea Krok, Elizabeth Dorger and Brittany Salas, made the finals of the event. Krok would finish fourth with a score of 238.15, followed by Dorger in seventh (213.60) and Salas in eighth (211.40).

The final event was the 400 freestyle relay, which Dunn, Bunster, Ryan and Napoli finished off in style, placing second in a school record and NCAA “B” cut time of 3:23.72, securing Fordham’s first Atlantic 10 title in a women’s sport.

In all, eight Fordham female athletes earned All-Atlantic 10 honors, finishing in either first or second place in their respective events, while breaking 14 school records and one Atlantic 10 record. Fordham also posted a total of six NCAA “B” cut qualifiers. In addition to the team, head coach Steve Potsklan was named Atlantic 10 Women’s Swimming Coach of the Year for the second straight year.