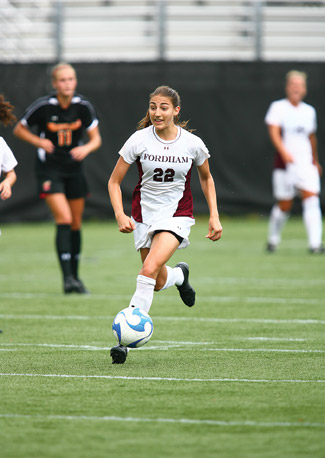 FCRH senior Katie McDermott is the executive assistant and head intern at Media 4 Humanity, a nonprofit that works to eradicate child slavery and human trafficking.
Photo courtesy of Fordham Athletics

Senior midfielder Katie McDermott has been named one of 30 candidates for this year’s Lowe’s Senior CLASS Award for women’s soccer.

McDermott, a senior in Fordham College at Rose Hill, is# one of four Atlantic 10 (A10) players being considered for the award. To be eligible, a student-athlete must be classified as an NCAA Division I senior and have notable achievements in four areas of excellence—community, classroom, character and competition.

In the community, McDermott has volunteered at Special Olympics regional events held at Fordham and administered a three-on-three charity soccer tournament this past spring to support St. Jude Children’s Research Hospital. She volunteers with National Advocates for Pregnant Women, which advocates for the rights of all women, with an emphasis on pregnant women and mothers.

McDermott is the executive assistant and head intern at Media 4 Humanity in New York City, a nonprofit that seeks to eradicate child slavery and human trafficking in the United States. She is a research assistant on the Youth Experiences Study, which examines how New York City children’s race, ethnicity, self-concept and experiences with discrimination affect their mental health and school performance.

A psychology major, McDermott holds a 3.865 GPA—the highest on the team. She has been a member of the Dean’s List and the A10 Commissioner’s honor roll in each of her three years at Rose Hill.

The leadership that McDermott displays on the soccer squad speaks to her character, according to her coaches. She is a two-year captain who has taken her leadership to a new level by vocally inspiring the team, organizing team-building events, and mentoring underclassmen.

She commands great respect from her coaches, Fordham administrators and opponents. In fact, opposing coaches have made her an All-Atlantic 10 selection in each of her first three years and a preseason all-conference selection three times.

On the field of competition, McDermott has become one of the most decorated women’s soccer players in team history.

She has earned All-A10 honors in each of her three seasons. She was an Atlantic 10 All-Rookie Team selection and earned All-Northeast Region accolades from several groups. For her career, she has 10 goals and eight assists for 28 points.

The field of 30 Lowe’s Senior CLASS Award semifinalists will be narrowed to 10 finalists midway through the regular season. Ballots will be distributed nationwide to media, coaches and fans, who will select one male candidate and one female candidate who best exemplify the four areas of excellence on which the award is based. The winner will be announced later this year at the Women’s College Cup.