skip to main content
Return to Fordham University
You are at:Home»Inside Fordham»Women’s Soccer Coach’s Drive to Win, Prepare Players for Success On and Off the Field, Draws Praise from Peers

There are no time outs in the game of soccer. 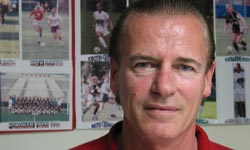 Ness Selmani, coach of Fordham’s women’s soccer team, knows this only too well. Last year, Selmani coached the women’s team to its finest season ever and the team’s first trip to an Atlantic 10 championship game. The 2006 campaign was just another in a string of winning seasons for Selmani—five in six years—and set single season marks in number of goals, assists and points.

For his efforts, Selmani was voted Atlantic 10 Coach of the Year by the women’s soccer division coaches, and his Fordham peers selected him as the University’s Coach of the Year. It was Selmani’s second such honor, on both counts.

Yet Selmani refuses credit, preferring instead to shine the spotlight on his team. The walls of his Rose Hill campus office in Hughes Hall are overflowing with pictures of his current and former players, and he keeps a calendar of all of their birthdays so that he remembers to call.

“Soccer is a self-thinking game,” he says. “You have to be smart to play this game because you make your own decisions on the field, and the coach cannot do much. So when I won Coach of the Year honor, it wasn’t really about me. It was about them, my team. It was them making their own decisions, and that’s the beauty of it.”

The game’s intensity, Selmani said, can lead to on-field skirmishes because there is little time for tempers to cool. Intelligent, disciplined players are what Selmani looks for, and routinely finds, as he recruits 12 months out of the year.

“Women’s soccer has changed tremendously in that we don’t even recruit from high schools anymore,” he says. “We pick from club teams that consist of the best players in every city and town. Thanks to Title IX (which provided women equal access to college athletics), the U.S. has the best women’s soccer players in the world. By the time they come to college, they know what they are doing.”

A native of Albania, Selmani grew up playing soccer, which he calls a poor man’s game because it requires little equipment and can be played practically anywhere. He attended Prishtina University in what was then Yugoslavia and played for local soccer team. He was selected to represent the Kosovo region, but was not allowed to play because he was Albanian by birth.

In 1972, his family emigrated to the United States. In New York, he played on semi-professional teams and coached his children’s teams. He went on to coach the boys’ and girls’ Empire State teams, and the New York team for the Olympic Development Program.

Frank Schnur, then Fordham’s men’s soccer coach, hired Selmani as his assistant in 1994, and the team ascended in rank, attaining a 9-5-4 record in 1995—its best mark since the 1990 season. In 1996, Selmani accepted his current head coaching position, a job he says he loves.

Selmani has six new recruits this year, including players from Arizona, Kansas and California. When seeking recruits, Selmani says he looks first at a player’s grades and then at her soccer ability.

“I am a very strict coach,” he says, “but I am trying to build good minds as well as good soccer players.”