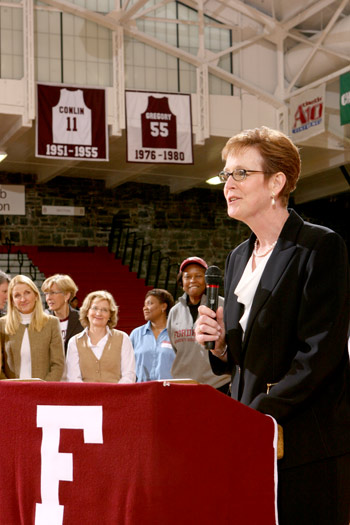 Anne Gregory O’Connell (FCRH ’80) speaks to the crowd at halftime of the women’s basketball game on Dec. 5 as her retired jersey number hangs in the background.
Photo courtesy of Fordham Athletics

Some of the most memorable games that Anne Gregory O’Connell (FCRH ’80) ever played were ones that she lost.

That may sound like an odd statement about Fordham’s all-time leader in women’s basketball for points scored (2,584) and rebounds (1,999), but it also speaks to the perspective she has on her time at Fordham.

O’Connell, whose number 55 was retired in a halftime ceremony on Dec. 5, said the camaraderie between her and her teammates made her Fordham experience as good as it could have been—even when the team lost.

“We got along off the court. It sounds so goofy, but we really did, and that helped us tremendously on the court,” she said. “Also, we respected Coach Kathy Mosolino. She was only about six years older than us, but we thought she did a really good job.”

On the occasion of joining men’s basketball star Ed Conlin as the only players to have their numbers raised to the rafters in the Rose Hill Gym, O’Connell reminisced about the 1977-1978 season, when the Lady Rams made it to the Small College Nationals in Florence, S.C.

“We had so much fun on that trip. We played Pepperdine, and I missed a foul shot at the end that cost us the game,” she said.

“When we were heading home, a person in the airport asked someone we were traveling with, ‘What did they win?’ and he said, ‘They didn’t win anything; they lost two games.’ We had a blast because we didn’t travel together during the season. So when we got to travel together, it was really fun.”

The four years that O’Connell played were like that. The team posted a 91-34 record with four consecutive postseason appearances. Fordham even hosted the quarterfinals of the women’s collegiate basketball tournament in 1979, where they played Tennessee, one of the most prominent teams in the country.

“We had beaten Long Beach State, which we were not supposed to beat at all. Next thing you know, we were playing Tennessee,” O’Connell reminisced. “They didn’t kill us; we gave them a good game.”

O’Connell also noted that times have changed much since her playing days, when the team was happy to accept hand-me-down warm-up outfits from the men’s team. She realizes that although she and her teammates received less support, they also didn’t play in a league as tough as the Atlantic 10.

After graduation, she briefly played professionally; became a guidance counselor at Holy Trinity High School in Hicksville, N.Y.; and married Jim O’Connell, who now covers basketball for the Associated Press.

Several weeks before the number retirement, she met the current women’s team at a luncheon in midtown Manhattan.

“It seems like this year they can do a lot more than in the last couple of years,” she said. “They have a really good core group of players—very talented. Once they get into their conference, it’s going to be tough, but they’re a good group of kids.”

Becky Peters, a point guard who is in her second year at the College of Business Administration, said she was flabbergasted when she realized what it took to score nearly 2,000 rebounds in four seasons.

“People say, ‘Oh, she played in the 1970s and Fordham didn’t play tough opponents back then,’ but I don’t care when you played. To grab that many rebounds, that shows real talent. She could rebound, but she could also put the ball in the basket,” Peters said.

“It inspires us to know someone who was in our shoes 30 years ago could do great things, like we can today.”