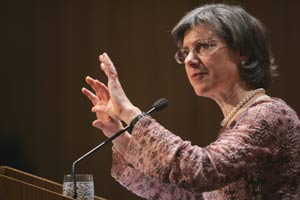 Though rarely found in the Bible, the perspectives of biblical women were featured in the hymns and homilies of Syriac and Greek churches during late antiquity, according to a Brown University scholar who spoke at Fordham.

These hymn writers from the fourth through sixth centuries gave women such as the Virgin Mary and Sarah a rhetorical voice in the lyrics of madrashes—poems that dealt with doctrinal matters, said Susan Ashbrook Harvey, Ph.D., at the Orthodoxy in America Lecture.

“The hymns assigned to the women’s choirs in the middle of the fourth century were explicitly liturgical,” said Harvey, a professor of religious studies. “The church spoke through these women’s choirs.”

During her speech, “Women’s Voices Bearing Witness: Biblical Memories in Ancient Orthodox Liturgy” on Feb. 26, Ashbrook Harvey explained that although women’s voices were absent in biblical narratives, they witnessed key events that the apostles did not.

Referring to the crucifixion story in the gospel of Matthew, she pointed out, “The women were there, at the cross, and they would soon be there at the tomb. They would be the first to see their risen Lord and the first to proclaim the glad tidings of His resurrection to the men who, at first, refused to believe them.”

Because of this example and others like it, Syriac and Greek writers would give a “striking prominence” to biblical women in the lyrics they wrote. Writers such as Ephrem Syrus and Romanos imagined the dialogue between biblical women and men, such as Sarah and Abraham and Mary and Joseph.

“These antique homilies and hymns present these women as favored exemplars of faith,” Ashbrook Harvey said. “They were always the heroes and the men were the obstacles. The female characters sing the radiant powers of faith.”

As depicted by Ephrem, Mary embraces her social sufferings as a form of power. She was a figure who embodied challenge, and whose voice is a teaching voice, according to Ashbrook Harvey.

In the Syriac Church, the fact that women’s choirs sang the hymns was significant, she continued, “It put the women on the center stage at these vigil services.”

How and why biblical women have been remembered in the Christian tradition is worth noting, said Ashbrook Harvey, whose area of scholarship focuses on late antiquity and Byzantine Christianity with an emphasis on Syriac studies.

“The words accorded to biblical women created a narrative space in which powerful speech and deeds might be possible,” she said.

Nearly 175 people attended the Orthodoxy in America Lecture—held at the McNally Amphitheatre on the Lincoln Center campus—including Joseph M. McShane, S.J., president of Fordham, and Archbishop Demetrios, the primate of the Greek Orthodox Church in America.

The lecture series was created in 2004 to strengthen ties between the Fordham and Orthodox communities and address the history, theology, spirituality and worship of the Orthodox tradition as it relates to contemporary American culture.