skip to main content
Return to Fordham University
You are at:Home»Inside Fordham»Women Should Learn the History of Racial Wealth Divide, Social Activist Says 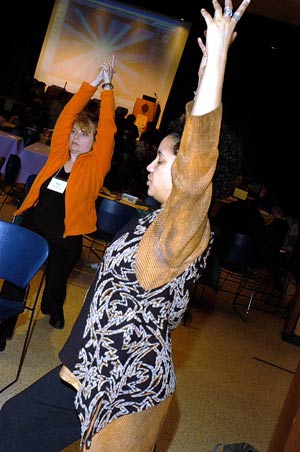 Attendees at the WE LEARN conference participate in a session of meditation and chair yoga.
Photo by Ken Levinson

The best way for women to build economic stability is to learn about the division of wealth in the United States, according to an activist who spoke at Fordham.

“The real reason for economic disparities are the policies and the rules that have been enacted historically,” said Meizhu Lui, former executive director of United for a Fair Economy in her keynote speech at the fifth-annual (Net)working Gathering and Conference on Women & Literacy.

She spoke on the first of the two-day event, co-sponsored by Women Expanding: Literacy Education Action Research Network (WE LEARN) and Fordham’s Graduate School of Education (GSE).

Lui, co-author of The Color of Wealth: The Story Behind the U.S. Racial Wealth Divide (New Press, 2006), traced how land and wealth were acquired in the United States and how people of color have been barred by laws and discrimination from participating in government wealth-building programs that benefit whites.

For every dollar owned by the average white family in the United States, the average family of color has less than a dime, Lui said.

“We can’t explain what’s going on today without looking at this history,” said Lui, a union organizer. “If you look at someone’s income, it’s like a snapshot, but if you want to look at their wealth, it’s more like a movie. You have to look back over time. We can say that inheritance is the main way that class and race privilege is passed along. As we understand how these levers work, we can take control of them and make them work for us.”

Lui said society at large must insist the government reorganize its finances and retool the distribution of wealth.

“Using the idea of household management, we can come up with some principles for running the national economy,” she said, adding that the federal government should invest in education, punish wrongdoing and irresponsibility and have citizens contribute taxes according to their ability to pay.

“The wealthy who get a lot of income through stocks and capitol gains don’t get taxed as much as the single mother who is working two jobs,” Lui said.

More than 180 adult and literacy educators and students from as far away as Georgia attended the conference, titled, “Building Alliances/ Construyendo Alianzas,” which was designed to explore the differences that divide women and consider ways of building alliances.

The community- and education-based conference included a series of workshops and events focusing on general issues of women’s basic/literacy education. An exhibit area featured a collection of women-centered literacy materials and curriculum resources gathered by WE LEARN, as well as the work of authors, publishers and literacy organizations related to the field.

“From access and equity to race, power and gender, this grassroots educational conference has been a great success in continuing and creating new discussions, relationships and collaborations about some of the most meaningful issues in adult literacy and learning,” said Kathleen P. King, Ed.D., professor of education and program co-director of the master’s in adult education program at GSE. “It was a great experience of empowerment, celebration and careful consideration of creating new solutions.”