skip to main content
Return to Fordham University
You are at:Home»Inside Fordham»William F. Baker Joins Fordham as Chairholder and Journalist in Residence 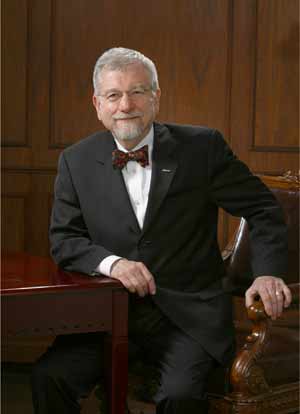 William F. Baker, Ph.D., says he would like to use Fordham experts as sources in
upcoming film projects.

Baker was named the Claudio Aquaviva Chair and Journalist in Residence at Fordham in October. Since then, he has been promoting the University through various media projects, including his book Leading With Kindness: How Good People Consistently Get Superior Results(AMACOM, 2008).

Baker said he always had envisioned getting involved in academia after his time at EBC, the corporation that oversees public television giants Thirteen/WNET and WLIW21 New York. Fordham came to his attention when the Graduate School of Education (GSE) partnered with WNET in 2004 for the annual Celebration of Teaching and Learning in New York.

When the University awarded him an honorary doctorate in 2007, Baker said he and his wife were very impressed with Joseph M. McShane, S.J., president of Fordham.

The University, Baker said, is a place whose time has come.

“The students here really want to learn; they’re not full of themselves,” he said. “I have lectured and taught at universities around the world, many of the so-called greatest ones, but there’s a magic about the student body here, as well as the faculty.”

“He understands media, and he understands how the media can help accomplish educational goals,” he said. “There’s world-class programming at WNET and WLIW, and he’s the man responsible for it.”

Baker’s role will be as varied as his own interests. On the teaching side, Baker, who holds a doctorate in industrial psychology, will be giving seminars and special classes. He also will continue to emcee the annual Founder’s Award Dinner. As journalist-in-residence, he is hoping to tap the Fordham faculty to create films like the ones aired on PBS stations worldwide.

“I’ve been president of something for the last three decades, so I’m used to working with others. The only way I’ve ever gotten anywhere is by standing on others’ shoulders,” he said. “Now I’m reaching out to many of the great faculty members at this University to see how I can help them and how we can work on projects together.”

In addition to finalizing a documentary paired with Leading With Kindness, Baker has been in talks with Cambridge University to commission a film that examines the similarities and differences of the three Abrahamic religions.

Like education, it’s a subject in which he is well versed, having produced the films The Face of Jesusand Picturing Mary. Baker said he’s hopeful that the history, theology and philosophy departments will contribute to the project, and in doing so, help raise their own profiles when the film is released to a worldwide audience.

“Fordham has a lot of great experts here,” Baker said. “We haven’t done enough to get the word out about how good they are, and maybe in the process of what I do, we can help make that possible.”