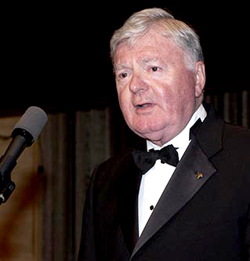 William D. Walsh was known to credit his personal and professional success to his Jesuit training, with its emphasis on ethics and Catholic values.

In his time as trustee, Walsh made many significant contributions, not least of which was a $10 million gift toward the construction of the William D. Walsh Family Library bearing his name.

“Fordham lost a giant this weekend. Bill Walsh was a dear friend, and my heart goes out to his loved ones,” said Joseph M. McShane, S.J., president of Fordham. “He and his late wife, Jane, were early partners in Fordham’s transformation, and left their mark on our campuses and our institutions. Bill was Fordham at its best: intellectually curious, generous at heart and in deed, gifted, unpretentious, and gentle. I will miss him. I know the Fordham family joins me in mourning his loss, and in keeping him and his family in our hearts and prayers.” 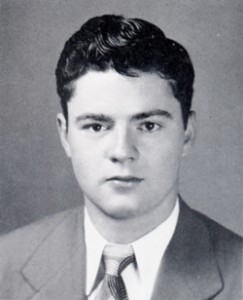 Walsh as pictured in his 1951 yearbook photo.

James McCabe, the head of University Libraries in 1997 when the Walsh Library was officially opened, said that without Walsh’s support, “the library would not be here.” In addition to helping build the library, the state’s fourth largest, Walsh also donated the collection that formed the Fordham Museum of Greek, Etruscan, and Roman Art. Walsh, together with his wife, donated more than 260 ancient artifacts that comprise the collection of Greek vases, coins, Etruscan pottery, and Roman sculpture, from the 10th century B.C. to third century A.D.

“If you are a classics major or minor, as I was, you can’t get a feel for classics in books alone,” Walsh said in 2007 at the museum’s opening. “Seeing [the objects]gives people a feel for it.”

The gift hinted at Walsh’s passion for a Jesuit education, which, in his time at Fairfield College Preparatory School and at Fordham, included required study of the classics in Greek and Latin. Walsh was known to credit his personal and professional success to his Jesuit training, with its emphasis on ethics and Catholic values.

After he attended Harvard Law School, those ethics would come into play in the field of law enforcement when he served as assistant U.S. attorney for the Southern District of New York from 1955 to 1958. He oversaw narcotics investigations in the garment industry and on the New York waterfront, eventually winning the indictment of crime boss Vito Genovese. Later, as counsel to the New York State Commission on Investigation from 1956 to 1961, he targeted illegal gambling as a revenue source for organized crime. 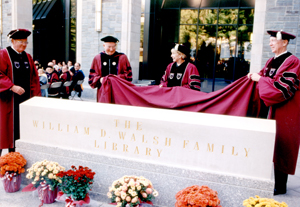 The official opening of the William D. Walsh Family Library in 1997. Walsh is at far left. (Photo courtesy University Archives)

Walsh left law for business in 1963 when he joined McKinsey & Company as a management consultant. Later, at Arcata Corporation, he helped build sales from $7 million to more than $800 million. He went on to found Sequoia Associates LLC, a private investment firm that specializes in leveraged buyouts. His extensive experience over a 35-year period allowed him to complete more than 100 acquisitions, divestitures, and public offerings.

Walsh remained a lifelong Fordham football fan, despite having been cut from the freshman football team by Vince Lombardi with the reassurance that “there’s plenty of things you do well, but football is not one of them.”

He was a fervent believer in renewing Fordham’s football program. In 2002, he agreed to make an annual challenge grant of up to $150,000 for the next five years to support the team. He would go on to donate more than $1.5 million supporting recruitment, the baseball team, and the general athletic fund. In recognition of his support he was inducted into Fordham’s Athletics Hall of Fame. In 2002, he joined Avery Cardinal Dulles, S.J., and Wellington Mara, FCRH ’37, as one of the three inaugural recipients of the Fordham Founder’s Award. And in 2003, the University honored him with a Doctor of Lawshonoris causa.

Walsh hailed from solid Irish stock, his father having been born in County Mayo, Ireland. He was chairman of the Board of Trustees of the American Ireland Fund and also served on the advisory board of Trinity College’s Neuroscience Institute in Dublin, Ireland.

He resided in the Bay Area of California, where he and Jane had six children and eleven grandchildren.

“Getting to know Bill Walsh has been one of the great pleasures of my career,” said Roger A. Milici, Jr., vice president for development and University relations. “He was a warm, utterly decent man, devoted to his family and friends. He loved his alma mater and was unstinting in demonstrating it. Bill had a wonderful gift for bringing out the best in everyone with whom he came in contact, and I am a better person for having known him.”