skip to main content
Return to Fordham University
You are at:Home»Inside Fordham»Wiesel and Turturro Discuss Real World Horror as Art

Can a film ever be made that captures the horror of the Holocaust? Can a work of art make an impact that changes the way people behave toward one another?

These were just a few of the questions addressed by author Elie Wiesel and actor John Turturro after the screening ofThe Truce, a 1998 film based on author Primo Levi’s autobiographical book, The Reawakening. 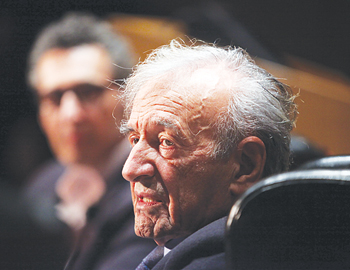 The Oct. 21 screening and conversation were part of the 2012 Forum Film Festival sponsored by Forum on Law, Culture & Society at Fordham Law, moderated by Thane Rosenbaum, the John Whelan Distinguished Lecturer in Law and Forum director.

The film follows a group of Italian refugees, including Levi, from Auschwitz after their release by the Russian army. Their train journey back to Italy wanders through Europe, detouring past destroyed train tracks and deep into post-war chaos. The roundabout journey allows for the reawaking of the senses and a return to humanity for the former prisoners, as the palette shifts slowly from wintry grays to lush summertime greens.

Wiesel, 1986 recipient of the Nobel Peace Prize, characterized the movie as disconcerting because of its heavy-handed, hopeful approach. It’s not the first time the author dismissed attempts to capture the Holocaust on film: Rosenbaum reminded the audience of Wiesel’s 1983 essay that opposed the trivialization of the Holocaust inherent to television and film.

“The universality of the Holocaust lies in its uniqueness,” Wiesel wrote at the time. “Those who seek to universalize it are dejudifying it in the process. If everybody was a victim, then no one was.”

After the screening, Wiesel echoed his 30-year-old essay.

“They were trying to tell the truth, as impossible as that it is,” Wiesel said of the Holocaust movie genre. “Was it was the same? Of course not.”

Any remake of a book, regardless of its theme, loses something in the cinematic translation, said Turturro in agreement.

“The nature of film is a compression of time,” he said. “ I’ve done a lot of adaptations of books and it can be depressing, because the things you love best about a book—the little details—get lost.”

Rosenbaum said, even in the best-intentioned films, the director’s vision often trumps that of the author’s. He cited a scene in The Truce when the refugee train is routed back to Munich. There, a captured SS officer kneels before Turturro (as Primo Levi), a scene that didn’t happen in the book. Turturro explained that the film director Francesco Rosi felt the film needed a redemption scene, a notion Turturro said he disagreed with.

Wiesel said that over-sentimentalizing the Holocaust was the primary reason he would never sell the screen rights to his books (although he did once consider selling to director Francois Truffaut.)

But he said he couldn’t possibly approach any aspect of the Holocaust from an artist’s perspective.

Watching The Truce was particularly personal for him. To a dead-silent audience Wiesel described the last conversation that he had with Levi a week before his 1987 suicide. Wiesel said he had told Levi that he would clear his schedule so that they could spend a week together.

“You and I will go away alone,” Wiesel told Levi.