skip to main content
Return to Fordham University
You are at:Home»Faculty Profiles»When What Is “Lost” Is Not Actually Gone 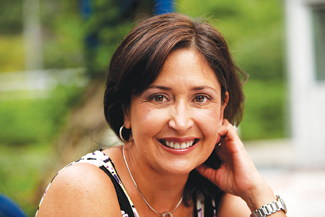 Rose M. Perez was 8 years old when her family left Cuba.
She remembers holding her mother’s hand as they marched with the line of travelers across the tarmac toward the plane. Suddenly her mother paused and looked upward, her expression stoic.

“I said ‘Mom, come on, the line is getting ahead of us,’” said Perez, Ph.D., an assistant professor at the Graduate School of Social Service (GSS). “I knew something was wrong, because she didn’t respond.”

Years later Perez learned that her mother had intentionally slowed down so that her relatives who gathered to watch the family depart would be able to see their place in the line.

Perez’s struggle to balance her Cuban and American cultures inspired her research on the adaptation of immigrants and refugees to U.S. society and how immigrants reconcile the worlds they must straddle.

Her doctoral dissertation focused on how Hispanic teenagers fare in social relationships based on their levels of acculturation into American culture. She found that acculturation moderated the effect of context (e.g., school, home, or other places) on mood, self-esteem, and concentration.

“The least-acculturated Hispanics experienced no differences in the emotions measured with friends or family. But if they are more acculturated, they do what many adolescents in U.S. culture do—they tend to be happier with their friends than with their family,” Perez said.
While studying adolescent acculturation, though, Perez realized that another dynamic was at play: although the children were trying to integrate into American society, their parents were clinging to their homelands.

“Acculturation is different in families. You have the children, who are adapting to American ways by virtue of being in school and such, and then you have the parents, who are staying ‘in the old country,’” Perez said. “How do you negotiate these two?”

For Perez, generational disparities in acculturation triggered memories of her own relatives’ experiences of remaining connected to their ancestral homeland. In response to these observations and several autobiographies by Cuban émigrés, Perez has begun an inquiry to understand the experience of leaving Cuba.

She interviewed 30 older adults who left Cuba in the early years following the 1959 revolution, and is recruiting more. Thus far, she found that many still hold poignant feelings about leaving the island.

“There is a strong attachment to the culture,” Perez said. “A lot of the participants I interviewed were the ones whose lives were changed by the Cuban revolution [which brought Fidel Castro to power], so they all describe this collective frozen grief about the year 1958 and they remember Cuba as a paradise. For them, it’s like a paradise lost.”

During the interviews, the participants’ grief manifested often. All had Cuban memorabilia in their homes and many of them said they dream of returning to the island one day when Castro’s system of government has ended.

Perez links their homesickness to the theory of ambiguous loss, a kind of loss that can paralyze the grieving process and prevent closure.

The first of these definitions applies for Cuban immigrants.

“Cuba is physically gone for them but it continues to have a psychological presence, and this important story has yet to be explored in research,” Perez said. “Something I might look at is measuring this experience of loss and its ramifications on well-being in a scientific way….”

Despite their loss, many Cuban immigrants also feel that they have gained, said Perez.

“They describe being so grateful to the United States… Had they stayed in Cuba, they wouldn’t have what they have here, which they appreciate. And they feel that the United States has embraced them and values them,” Perez said. “It’s about ambiguous loss as well as gain.”

However, even as they near the last years of their lives, many remain bitter because they would have remained in Cuba, had Fidel Castro’s revolution not led to interventions that adversely affected them.

In addition, she plans to work with the second-generation children of Cuban immigrants, as well as other ethnic groups, to analyze the effects of ambiguous loss on younger generations that are more removed from living in and emigrating from the ancestral homeland.
Besides helping to increase understanding of these areas,

Perez said that such research would help immigrants themselves to understand that it is normal to struggle with settling into a new culture.

“It’s normal to feel incongruent feelings. On the one hand, you appreciate what you have now, but you also feel a loss,” Perez said. “I would like to tell this important story and to help normalize, not pathologize, the experience of loss. Exploring ambiguous gains could also prove useful since even less is known about these.”