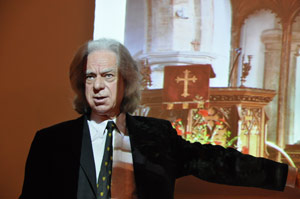 David Cressy, Ph.D., discusses ceremonial style and parish conflict in the court of Charles I.
Photo by Gina Vergel

The decoration of a church may not stir much passion today, but during the Protestant Reformation, details such as where the altar sat and the type of furnishings used in God’s house were enough to start a civil war, a scholar said on March 4 at Fordham.

“This is where God lives and you’ve got a division within Christian culture, certainly in early modern England, where some are saying all places are holy, no place is more holy than any other place, because God lives everywhere,” said David Cressy, Ph.D., Humanities Distinguished Professor of History at Ohio State University.

Cressy discussed church interiors, and how they were sensitive settings of strife and discord in the opening phase of the Protestant Reformation and in subsequentgenerations in “The Redecking of the Altars: Ceremonialist Style and Parish Conflict in the Court of Charles I,” the St. Robert Southwell, S.J., Lecture held at Fordham’s Rose Hill campus.

Only in a fractured religious culture, with competing claims for salvation and competing devotional aesthetics, would the material environment for worship cause such controversy that it would agitate a civil war, Cressy said.

“Such divisions were especially sharp in the reign of Charles I, when the redecking of the altars looked to some like an apostasy, a betrayal of God’s work in the Protestant Reformation,” he added.

Furnishings and decorations could be culturally and politically divisive, and they fueled the tensions that took England into civil war. The reign of Charles I was especially fraught, Cressy explained.

“High ceremonial churchmen of the 1620s and 1630s took to calling the 16th century changes a deformation—not reformation—and undertook an elaborate re-beautification. In their eyes, they were honoring God by furnishing his house, so that every curtain and cushion, every embroidery and carving, had the quality of a prayer,” he said.

“To embattled Protestants, the kind we call Puritan, such deckings and dressings were signs of backsliding, a retreat toward Rome, and deliberate reversal of the Reformation. They were allurements to luxury, lapses of faith, inducements to sin.”

Criticism of the redecking of the altars burst forth with a flood of objections as Charles I’s regime unraveled in 1641, Cressy said.

“Whereas ceremonialists imagined the church as a bride, their enemies saw her tricked out as a harlot,” he said. “A cultural war raged between enthusiasts for the beauty of holiness and adherents of puritan godliness, between those swept up by the mystery of the sacraments and others who dwelt on the preaching of the word. The way the church was dressed and configured showed which side was ascendant.”

Meanwhile, while Charles I’s government wanted order and conformity, it instead generated dissension with controversial policies such as the licensing of sports on Sunday and the suppression of Calvinist preaching.

In the end, the ceremonialists won.

“Visit an English parish church today and you will likely find an east-positioned communion table behind steps and rails, with multicolored altar cloths, embroideries and frontals,” Cressy said. “The same can be seen in New York and Connecticut. Ours is a golden age of church decoration, in which roof lofts, ornaments and images have luxuriantly reappeared. Earlier English Protestants would be shocked and saddened at the sight.”