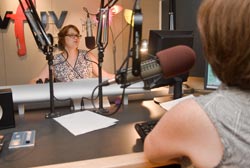 Claudia Marshall (left), host of WFUV’s City Folk Morning, chats on the air with co-host Julianne Welby. The station’s corporate underwriting has tripled in the past four years.
Photo by Ryan Brenizer

Fordham University radio station WFUV-FM 90.7 increased its underwriting by 30 percent during the 2006-2007 fiscal year, crossing the $1 million mark in revenue for the first time in its history.

The 50,000-watt public radio station, which operates out of studios at Keating Hall on the Rose Hill campus, took in nearly $1.2 million in underwriting revenue during the fiscal year that ended June 30 from companies and organizations that aired 10- and 20-second announcements. About 20 percent of the station’s funding is raised through corporate underwriting.

“The growth in our underwriting is exhilarating to see,” said WFUV General Manager Ralph Jennings, Ph.D. “And I expect that to continue to grow… . When I first came to WFUV in 1985, we made about $80,000 to $85,000 in listener support and that was it. Over the years, we’ve developed the station to a point where listeners want to support it and underwriters want to attach their cart to ours.”

WFUV, which airs news from National Public Radio and plays an eclectic mix of music throughout the day, has about 300,000 listeners a week, and is staffed by 27 employees and 70 students. Listener support remains the largest source of revenue for the station at about $2.6 million a year.

Shari Rosen Ascher, WFUV’s director of corporate underwriting, said that underwriting revenue has tripled in the last four years, driven in large part by a vigorous effort to convey to companies and organizations the benefits of reaching the station’s listeners.

Rosen Ascher said WFUV’s listeners represent a highly sought-after demographic: 74 percent are between 25 and 54 and 79 percent either attended or graduated from college. WFUV also ranks No. 1 among all New York stations in the percentage of listeners with household incomes of $150,000 or more.

“It’s very exciting,” Rosen Ascher said. “The new approach has been to tell companies that it’s good business to reach our listeners about their products or services. Our view is that we’re going to help them reach our audience, people they can’t reach with traditional media. It’s worked very well.”

With the new approach, the station has been able to diversify its underwriters in recent years from entertainment- and music-related companies to other sectors, including higher education, health care and retail.

Jennings said that increasing corporate underwriting at public radio stations can be difficult because there are limits on what can be said in the 10- or 20-second spots. Federal Communications Commission guidelines allow messages to include only company name, a value-neutral description of products or services, and either a Web address, location or phone number. Moreover, the station limits underwriting messages to one minute per hour. Despite the limitations, Jennings said that a number of companies and organizations have underwritten the station year after year.

Both Jennings and Rosen Ascher believe that the station will be able to attract even more underwriting from sectors that have traditionally sponsored programming on NPR, such as the legal, banking and hospital fields. Underwriting of the station’s website, they said, is also a potential source of increased underwriting revenue.

In addition to the increase in corporate underwriting, the radio station announced that it had won seven Public Radio News Directors Incorporated Awards at the organization’s annual conference on July 21.