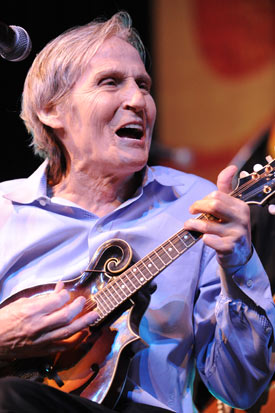 WFUV (90.7 FM) raised roughly $500,000 at its third annual gala, a night filled with laughter, tears, a performance by Levon Helm and even a conga line.

That sum, which includes $80,000 garnered from a silent auction held at the event, brought the total amount raised over the past three years to $1.7 million. Money from the gala supports the capital needs of WFUV, Fordham’s public radio station, including facilities and technology.

“WFUV first took to the airwaves over six decades ago and has evolved to one of the most respected—and most listened to—stations in our country,” said Joseph M. McShane, S.J., president of Fordham.

“The station fulfills a dual mission,” Father McShane said. “While serving the public with its broadcasts, WFUV also mentors many students and continues to be a springboard for them as they head into careers in broadcasting, journalism and the arts.

“Indeed, were it not for WFUV, the world may never have come to know the voices and talents of Fordham alumni Charles Osgood and Vin Scully, for whom lifetime achievement awards have been named.”

At the event, held at Gotham Hall in Manhattan, the station honored three giants in the music and sports and news broadcasting worlds.

Baseball Hall of Fame member Ernie Harwell posthumously received the Vin Scully Lifetime Achievement Award in Sports Broadcasting. The longtime broadcaster for the Detroit Tigers died the day before the gala after a months-long battle with cancer.

“I’m proud to be here for my good friend Ernie Harwell,” said baseball Hall of Famer Al Kaline, who accepted the honor on Harwell’s behalf. “Ernie was probably the greatest historian in baseball. For him, it wasn’t just a job, but a way of life.”

Kaline, who played his entire career with the Detroit Tigers, said Harwell would want to be remembered with smiles rather than tears. Yet Kaline choked up when recalling the moment Harwell asked him to accept the Scully award on his behalf. 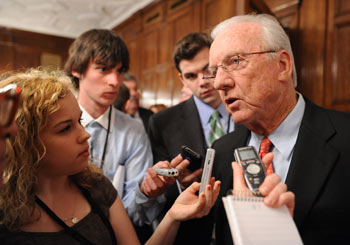 “He said, ‘Vin Scully was the greatest announcer of all time.’ Well, we Tiger fans respectfully disagree,” Kaline told the crowd.

Bob Scheiffer, one of the most experienced reporters in broadcast journalism, said it was a wonderful honor to receive an award with Charles Osgood’s name on it.

“Thank you for recognizing news with this award. It reminds us that we must have independently gathered information to compare with government’s version of events,” Sheiffer said.

Levon Helm, who WFUV music director Rita Houston said “brought the blues to The Band,” was on hand to receive his award just a few days after playing Jazzfest in New Orleans. Helm, who defeated throat cancer after a diagnosis in 1996, accepted the Sound & Vision Award with his trademark smile.

The evening ended with an electric, hour-long performance by Helm and his band. They rocked the hall with songs from his career as a founding member of The Band and from his 2009 Grammy-winning album, Electric Dirt. Hits such as “Got Me a Woman” and the classic “The Weight” got nearly all of the 400 guests on their feet and caused a conga line to break out halfway through the performance.

Items such as an in-home performance by the Kennedys and a chance to attend one of Helm’s famed Midnight Ramble sessions at his home studio in Woodstock, N.Y., were among the featured items up for bid at the silent auction.
A
ttending the gala was an array of celebrities from the worlds of sports, entertainment, politics and news. Presenters and attendees included journalist Charles Osgood and musicians Suzanne Vega, Willie Nile, James Maddock, Richard Julian, Cory Chisel, Erin McKeown, the Kennedys, Lucy Kaplansky, Kevin Hammond and Amy Correia. 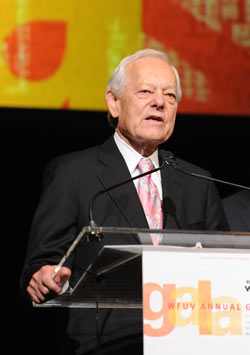 “WFUV is loved by so many. There’s nothing like it on the dial,” Bloomberg said.