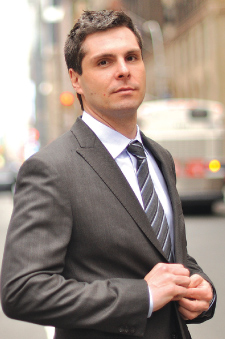 When Adam King returned home in 2009 after five years on the 173rd Airborne Brigade Combat Team in Germany and Afghanistan, Wall Street had hit a new low.

He told friends he wanted to go into business and they expressed consternation—why, after all the work he’d done to advance to an army captain, would he want to work on Wall Street?

King, a 2004 graduate of U.S. Military Academy at West Point, grew up in a military family that eventually settled in Long Island’s Oyster Bay. As the financial sector had just dragged the country to the brink of collapse, King said his family and friends were miffed at why he’d want to leave a “noble career” for one “where there’s a perception that you’re part of the problem with this country.”

But that was precisely the point.

“Wall Street needs people who have the values and integrity that I feel I received in the military and at West Point,” he said. “In the Army, when you see something going wrong, you stand up.”

King began his quest to enter the financial world by working in operations for a healthcare company in Western Massachusetts. He decided he wanted to come back home and return to school, and he chose Fordham because of its “incredible network in New York City.”

The University also reached out to him with a scholarship toward his M.B.A. in finance, which has led him to become a passionate advocate for scholarships.

“When you pay it forward, it really changes the mindset of students because you’ve invested in them,” he said. “Then the students also want to give back.”

King has certainly given back already. He serves as the Graduate School of Business Administration’s student advisory council president and said he’s learned the difference between leadership in the Army and leadership in civilian life.

“You have to earn people’s respect and trust before you can galvanize them in one direction or another,” he said, adding that the 2008 financial market meltdown demonstrated how leadership in American business can have global repercussions. “Coming out of business school today, we really have to set a better example for the rest of the world in terms of business practices.”

Following graduation, King will take up a new role in corporate strategy for Wolters Kluwer, the Dutch global information services company. He said that the area of long-term planning in corporate finance attracted him because it allows him to figure out how a company can grow over time. He said he is also attracted to working for a company that understands the value of information as a commodity.

“Information levels the playing field,” he said. “Conflicts can be avoided because information is so apparent [that]you can’t cover things up that easily. And that makes nations become more democratic.”

But good business leaders know how to use information to advance more than just themselves, he said. ““It’s not about the short term gain you can make for yourself,” he said. “You’re looking at the long-term health and growth of the nation and how you can contribute to it.”