skip to main content
Return to Fordham University
You are at:Home»Inside Fordham»West Indian Teenagers Show Different Faces to the World 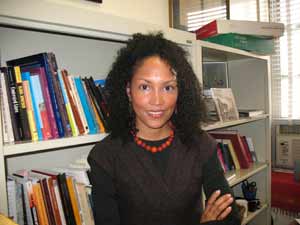 Oneka LaBennett, Ph.D., began researching first- and second-generation West Indian adolescent girls for her dissertation more than 10 years ago. The group so enthralled her that she extended the study through her post-doctoral years and is writing a book about her findings.

Her study subjects—residents of the Crown Heights and Flatbush neighborhoods of Brooklyn, ranging in age from 12 to 17—gave her a firsthand look at how immigrant teenagers use American and Caribbean culture to shape their gender and ethnic identities.

“I was interested in how these girls become American through popular culture,” said LaBennett, assistant professor in the Department of African and African-American Studies and co-research director for the Bronx African American History Project.

“Were they trying to retain a separate West Indian identity and articulate that through the use of obscure Caribbean artists, or were they listening to the same things their African American peers were listening to?” LaBennett said.

What she found was that this particular group of immigrant teenage girls found ways to assimilate in school, at home, at work and among friends by playing up the ethnic identity that served them best.

Anthropologists and sociologists call it code switching—behaving one way in one social context and then another way in another setting.

“And it doesn’t mean that one way is disingenuous,” LaBennett said.

To get the best sense of how these girls used popular culture to form their identities, LaBennett decided that she would observe them in an environment beyond school or home. So she spent time with YMCA basketball cheerleaders in Flatbush and interns at the Brooklyn Children’s Museum in Crown Heights. Both neighborhoods are full of first- and second-generation immigrants.

“I definitely saw them [code switching]; they knew strategically when to assert a West Indian identity or an African-American one,” she said.

Take, for instance, how they acted in front of their parents, who, unfortunately, often taught them negative stereotypes about African Americans “not working hard or doing well in school,” LaBennett said. “These stereotypes are, of course, incorrect and are the by-product of years of institutionalized racism against African Americans. West Indian parents sought to protect their children from being labeled in similar ways.”

“The girls downplayed any interest in hip-hop culture often associated with African Americans,” she said. “I’d ask them, ‘Are Lil’ Kim or Foxy Brown good role models?’ They’d say, ‘No way. I don’t respect them. I wouldn’t dress like them.’ But that evening, I’d see them singing along to a Foxy Brown song.”

The girls also played up their West Indian identities in front of teachers, some of whom hold negative stereotypes of African Americans, LaBennett said.

“They knew that if they spoke in a West Indian accent or they had a flag on their notebook from their country it was a way of showing that they were different,” she said.

LaBennett also found that while the girls often switched identities, sometimes opting to align with their African-American peers, they also did some of the influencing.

For a Mardi Gras celebration project assigned to the group at the Brooklyn Children’s Museum, an initial debate over what type of music should dominate a parade float ended with a compromise.

The bidirectional influence between the teens is symbolic of current trends in American youth culture, where hip-hop borrows from the Caribbean and vice versa.

“An American hip-hop artist might use some slang or musical techniques made popular in the West Indies, and a Caribbean artist may use themes from hip-hop,” she said.

Code switching wasn’t the only reason that the West Indian teens chose to align with their African-American peers at times, LaBennett said.

“So one thing I looked at is how the consumer sphere or the leisure sphere is a sphere of inequality for these teens. They didn’t have access to the same consumer goods that a lot of more privileged teens take for granted,” she said.

LaBennett plans to conduct follow-up interviews with the girls she spent time with, who are now enrolled in college.

“I’d like to see if the ways they think about their identity have remained the same,” LaBennett said.