skip to main content
Return to Fordham University
You are at:Home»Inside Fordham»Website on All Things Related to Hispanic Pastoral Ministry Launched at Fordham 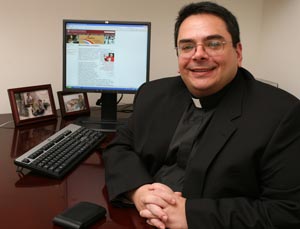 Fordham University’s Graduate School of Religion and Religious Education (GRE) has launched a Spanish-language website that offers courses in theology and scripture for Hispanic pastoral ministry in the United States.

Claudio M. Burgaleta, S.J., assistant professor of theology who spearheaded the initiative, said the site, known as Isidoro, is designed to address the needs of the Hispanic Catholic community, one of the fastest-growing populations in the nation. In addition to the courses, the Isidoro site offers articles, essays and other documents for downloading, as well as links to inspirational websites.

“The influence of Latino culture, language and traditions raise different concerns to be addressed, and there really wasn’t a website with content for the Hispanic pastoral reality in the U.S.,” said Father Burgaleta. “The ministry of the future is going to be more bilingual.”

According to 2006 statistics from the Pew Forum on Religion and Public Life, nearly 70 percent of Hispanics in the United States consider themselves Catholic. And according to the U.S. Census, 37.5 percent of the Hispanics are under age 18, a figure Father Burgaleta said has likely increased over the decade.

“Clearly, the ministry is going to have to adapt to the interests and needs of younger people as well,” Father Burgaleta said. “And as we know, younger people are the ones who are disproportionately using the Internet.”

The site takes its name from St. Isidore, who was archbishop of Seville in the early 7th century and is regarded as one of the leading scholars of the early Middle Ages. Because of St. Isidore’s passion for learning, Father Burgaleta said that he is referred to in the Spanish-speaking world as the “patron saint of the Internet.”

Pastoral ministry focuses on sharing the mission of the church with others through religious education or ministering both by ordained and lay ministers. Areas where Hispanic pastoral ministry diverges from regular pastoral ministry, Father Burgaleta said, include processional practices and devotions to certain saints, such as Mary.

Internet sites that cater to such culture-specific interests are rapidly expanding on the Web, and Burgaleta said Isidoro includes a “cybernetic inspiration” link to sites that feature daily spiritual messages in Spanish.

For Father Burgaleta, outreach efforts such as Isidoro have the potential to develop into their own forms of ministry and evangelism not only on the Internet, but through other media. In fact, the site features a quote from Pope Benedict XVI endorsing such evangelism to help Christ’s message reach large numbers of people around the world.

The Isidoro site is funded in part by the Office of the Superior General of the Society of Jesus and the Sisters of Charity of St. Elizabeth in Convent Station, N.J.