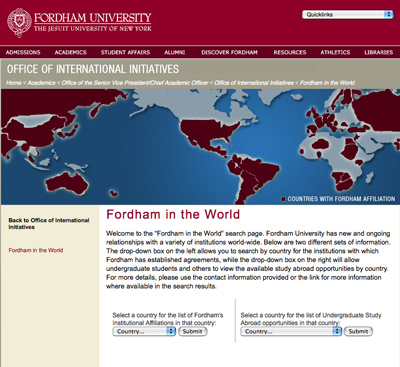 From London to Beijing to Pretoria, Fordham’s foreign presence has been increasing steadily. For those who wish to explore the University’s global partnerships, the Office of International Initiatives has designed a better map.

The office, which serves as a records and resource center for the University’s international affiliations, has unveiled “Fordham In the World,” an interactive website that allows users to access information with the click of a button.

Susan Hecker Ray, Ph.D., coordinator of the office, said the database of affiliations and contract partnerships on the site was more than two years in the making. In fact, it was part of the plan for the office as envisioned by Joseph M. McShane, S.J., president of Fordham.

“The purpose of the site is to find out where Fordham is in the world, and then to try to fill in where the University’s strategic plan wants Fordham to be,” Hecker Ray said. “Father McShane has very clear ideas about this. As far as international collaborations go, he has four major parts of the world on which he wants to concentrate.”

Of those locations, major partnerships in London and Beijing are firmly established, while those in Pretoria, South Africa and Rio de Janeiro are in the making. Hecker Ray, who was a professor of German at Fordham before creating this office, said pursuing connections and establishing the partnerships’ legal structures help her know not only where Fordham is headed, but where it already is firmly established.

“Anyone who comes into the office and says, ‘You know, I’d like to set something up in Vietnam,’ or ‘I have colleagues in India,’ or ‘Let’s pursue this in China,’ I can go to our records and say, ‘Well, we already have contacts there; let’s expand upon them,’” she said.

There are roughly 100 institutional affiliations that can be accessed through a pull-down menu on the site. A second menu gives undergraduates access to a list of study-abroad countries and programs.

“We wanted deans, vice presidents, faculty members, administrators and development officers to know where we are,” Hecker Ray said.

“We also wanted alumni, faculty, students, parents and prospective students to know. They’re interested not only in where Fordham is institutionally affiliated, but where they can send their sons and daughters to enhance their Fordham education.”

Aside from the obvious advantages of having a presence in global urban centers such as London and Beijing, another reason to expand internationally is to connect with Fordham’s fellow Jesuit institutions, such as the Pontifical Catholic University of Rio de Janeiro. As an undergraduate, Hecker Ray spent her junior year studying in Munich, so she understands how immersing oneself in another culture can be a transformative experience.

“We don’t want to transplant Fordham to someplace else. We want to send our students into the world to gain a genuine cultural experience of a particular country,” she said.