skip to main content
Return to Fordham University
You are at:Home»Inside Fordham»War Correspondent Implores Graduates to Make the Most of their Time 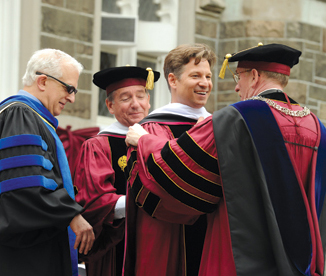 Joseph M. McShane, S.J., president of Fordham, right, bestowed an honorary degree upon NBC News Chief Foreign Correspondent Richard Engel, who gave the address at the University’s 168th Commencement. Behind Engel is Robert Daleo, GSB ’72, chairman of the University Board of Trustees, and to the far left is Ron Jacobson, Ph.D., associate vice president and professor of communication and media studies. Photo by Chris Taggart

Engel, a New York City native and one of the nation’s foremost chroniclers of Middle East wars, revolutions, and political transitions, used his commencement address to reflect on being captured and held hostage for five days last December in Syria by government loyalists.

“When you have guns pointed at your head, your thoughts are very clear.  The fat of doubt is trimmed away,” said Engel, who was subjected to mock executions by his kidnappers. “As I sat there and thought, many times, ‘OK, now I’m about to die. It will come very soon, and it will be a bad death,’ I also thought, and this is critical, ‘At least I tried. At least I got part of the way.’

Engel told graduates that if they subtract the 20 years of life they’ve lived so far and the 10 final years they can expect to live, that leaves them with roughly 50 years to make the most of their lives.

“‘I [have]50 years to accomplish something, and unfortunately,’ I thought, ‘I’m not going to get all the way, because these people in ski masks are about to cut my life short.’ I was angry, I was annoyed, but at least I knew I was going to die trying to be myself.” 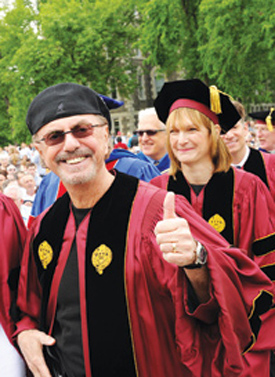 Honorary degrees were awarded to Engel; singer and musician Dion DiMucci; Paulette LoMonaco, R.G.S., executive director of Good Shepherd Services; John Tognino, PCS ’75, former chair of the Fordham University Board of Trustees; and Patricia E. Harris, first deputy mayor of New York City. In all, a total of 3,445 degrees were conferred at the ceremony.

Preet Bharara, U.S. attorney for the Southern District of New York, and Sally J. Bellet, Esq., LAW ’76, former vice president of real estate development for Amtrak, each received an honorary doctorate of laws at the Fordham School of Law diploma ceremony on May 19 at Radio City Music Hall, where Bharara addressed the graduating class.

Kaushik Basu, Ph.D., chief economist and senior vice president for development economics at the World Bank, received an honorary doctorate of humane letters and gave the keynote address at the diploma ceremony for the Graduate School of Business Administration, also on May 19, at Avery Fisher Hall.

Peter Vaughan, Ph.D., who is retiring as dean of the Graduate School of Social Service, spoke at that school’s diploma ceremony on May 20, also at Avery Fisher Hall, and was awarded the University’s Presidential Medal. (see U.S. Attorney Delivers Graduation Address at Fordham Law)

Speaking about four archetypal personalities, Engel said it is of the upmost importance that graduates of the Class of 2013 have the “guts” to choose their path now, be it as a hedonist, commander, nurturer, or explorer. Characterizing himself as an explorer, Engel said he knew, upon graduation from college, that he wanted to be a foreign correspondent. He moved to Cairo two weeks later with a $2,000 nest egg and a determined dream.

When graduates know for sure what suits them, they will be able to truly accomplish something great, he said. The good news, he noted, is they have those choices when many people in the world don’t.

“I’ve been in war zones for a long time. I’ve met nurturers, hedonists, commanders, and explorers who, because of where they live and the famine and poverty and violence all around them, don’t have options. If you are living in Aleppo, Syria, today, you don’t have the luxury of sitting around and wondering, ‘What’s my true nature, and what can I do that will allow me to experience it?’” he said. “[Their] main concern is staying alive. 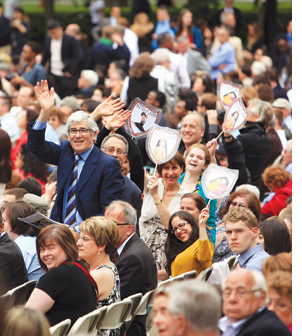 The weather obliged as nearly 15,000 people attended an outdoor commencement ceremony at Fordham University on May 18.
Photo by Chris Taggart

“You have choices. Don’t squander this opportunity. Have the guts to take a chance.”

Joseph M. McShane, S.J., president of Fordham, told the Class of 2013 that although their academic careers might be coming to a close, their transcripts for life were now going to be updated via “take-home,” “open-heart” tests that will emerge from everyday situations.
“Strangely enough, when all is said and done, all of these heart and life tests will consist of only two frightening questions: Whom do you love, and what do you love?  These questions will, in turn, invite and challenge you to identify, embrace, and nurture the values that will define and direct your life,” he said.

“My friends, as you prepare to confront these questions and thus begin the work of compiling the transcript of your lives, I hope that you will always be haunted and guided by the challenge and the dream that stands at the heart of Jesuit education: To educate men and women for others, men and women whose lives will always be marked by competence, conscience, compassion, and a deep commitment to justice and the cause of the human family.”

Father McShane also thanked the Class of 2013 for raising $1.046 million, the largest class gift in the University’s history. Be “conspicuous in compassion rather than in consumption,” Father McShane implored them, and live lives of bold, daring love. He said that if they allowed themselves to be bothered by injustice, embrace suffering, and champion the poor, they would be “true sons and daughters of Fordham.”

“When I see you on Fifth Avenue, and you call out to me and tell me what you have done, I promise that I will throw open my arms and say, as I listen to what you have achieved in love, ‘You are, all of you, as you are today, my great heroes.’”