skip to main content
Return to Fordham University
You are at:Home»Inside Fordham»Walsh Library Gets New Solar Array as Part of Energy Upgrade 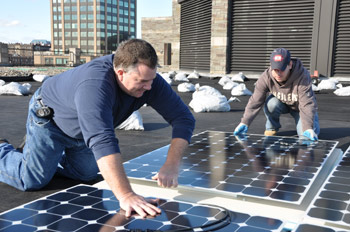 John Malandro and Anthony Piciocchi of the International Brotherhood of Electrical Workers Local 3 install solar panels on the roof of the William D. Walsh Family Library. Photo by Patrick Verel

Fordham’s biggest energy consumer is going on a diet.

The William D. Walsh Family Library, which opened in 1997 and uses more electricity than any other building on the Rose Hill campus, will be retrofitted with upgraded lighting and energy efficient heating and air conditioning systems as part of the University’s sustainability master plan.

Last October, the University’s application for a grant from the New York State Energy Research and Development Authority was accepted. Fordham received $500,000 to retrofit the library, a project that is scheduled for completion this year.

In addition, workers outfitted the roof of the library’s southeast wing last December with 84 solar panels. When they become operational next month, the panels will generate 305 watts of electricity each, for a total of 25 kilowatts.

A separate grant of $128,000 covered nearly half of the purchase and installation costs of the panels and accompanying equipment. The setup includes an apparatus that converts the 25 kilowatts of DC (direct current) to 21 kilowatts of AC (alternating current).

“It’s a new technology for us that we’re trying, and like anything new, we want to see how well it works and if it could fit in our overall strategy,” said Marc A. Valera, vice president of facilities management.

Combined, the energy efficiency measures are expected to reduce Walsh Library’s energy use by 670,000 kilowatt hours and production of carbon dioxide by 330 metric tons annually.

The panels, which are photovoltaic cells mounted on the roof, are the most visible example of Fordham’s commitment to Mayor Michael Bloomberg’s call to reduce New York City greenhouse gas emissions 30 percent by 2017, Valera said.

The plan to meet this challenge includes using cleaner fuels for its boiler plants, building energy efficient LEED buildings, such as the Campbell, Salice and Conley residence halls (anticipated to be LEED Gold upon completion) and retrofitting existing physical plants with energy-efficient systems and equipment and installing new technologies, such as solar arrays.

Valera noted that in the 12 years since Walsh Library opened, technology has changed a great deal. But simple, behind-the-scenes actions, such as replacing a bulb with one that is more efficient or adding insulation, can make a huge difference.

“Some of what really helps reduce energy consumption in buildings is just not that sexy,” he said.