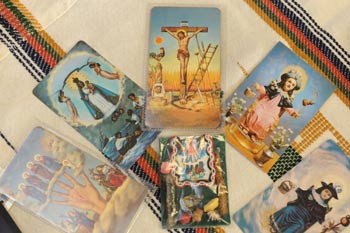 Several holy cards used in the practice of Afro-Latin
religions are part of the collection donated to Fordham by
Maureen A. Tilley, Ph.D.
Photo by Chris Taggart

“I had all these books related to Santeria and Voodoo traditions. Since the focus of my teaching has shifted with my move to Fordham, I no longer need them for my own work, so I figured they could be used in the library,” said Tilley, who grew up in Southern California among “all things Latino.”

Tilley taught courses in Afro-Latin religions at the University of Dayton as well as Florida State University before coming to Fordham. The classes covered faith systems such as Santeria, Voodoo, Hoodoo, Umbanda, Candomblé and New Orleans Spiritism.

The donation to the library included materials and artifacts such as candles, holy cards, videos, audiotapes and an extensive collection of books.

“What will be helpful to the library is not just the donation of materials, but the time and energy they don’t have to expend to acquire volumes that are out-of-print or ones that I had to buy overseas,” Tilley said. “Some of the items are hard-to-find ephemera—not available through regular book suppliers but only in small religious goods stores where no one speaks English. The fact that it is a ‘collection’ means that someone actually made judicious choices for the sake of research and teaching, the same goal as the library itself.

“This is a collection I am happy and proud can be used by the University,” Tilley added.

Among the books was one of Afro-Latin religious recipes.

“The recipes are for anything you can think of that has a psychological component that is affecting your health,” Tilley said. “For example, you might say to a [Afro-Latin religious] practitioner that you have bursitis in your shoulder that isn’t clearing up, and she might say, ‘Well, what sort of trials and griefs might you have that you are shouldering?’ And then she finds something to give you to fix whatever is causing your grief.”

Among the artifacts were several interesting candles, such as the “tapa boca” candle, which is burned to stop malicious gossip, and a white death candle, which is used to wish someone a “good and peaceful death.”

“These materials are especially relevant to Fordham University, considering that Santeria is widely practiced in New York City and the Bronx.”

Santeria, a syncretic religion of West African and Caribbean origin, is a system of beliefs that merges the Yoruba religion (brought to the New World by slaves imported to work on Caribbean sugar plantations) with Roman Catholic and Native American traditions. These slaves carried various religious traditions, including trance for communicating with ancestors and deities, animal sacrifice and sacred drumming.

“It was how these slaves reconstituted their religion,” Tilley said.

Santeria began popping up in the United States in the 1930s and 1940s, when there was migration from Cuba and Puerto Rico, yet it was still “underground” at that time, Tilley said.

“It picked up in the 1980s when Fidel Castro emptied Cuban prisons and ordered the Mariel boatlift, which brought people to the U.S. who had been santeros their whole lives,” she said. “From the 1980s to about 2000, it was the fastest-growing religion in the United States.”

Increased migration and the fact that these religions are no longer prosecuted are fueling the upswing in statistics, Tilley added.

“It is also very popular because it is a very ‘this worldly’ religion in that it focuses on what is happening now, such as problems with your job,” she said. “You may look at some of the artifacts, such as herbs to help enhance your marriage, and think, ‘This is religious?’ Hey, if it means peace in the family, people will try it.”