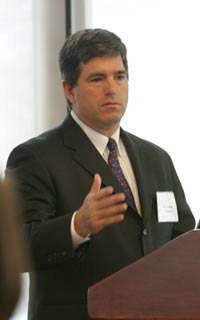 Smollen, global head of Dresdner Bank’s agency securities lending business, said international experience is essential to his business and encouraged the gathering of more than 30 CBA students to travel abroad during their time at Fordham. He also emphasized the importance of practical experience in addition to their coursework.

“I cannot over-emphasize the importance of internships,” Smollen said. “What you guys really need is to get those names [of the top financial firms]on your resumés and to get those experiences and this is the advantage we have at Fordham. … It is truly the key advantage we have over guys who are coming in from the University of Michigan or Duke University and places like that.

Smollen joined Dresdner, part of the Munich-based financial services giant Allianz Group, in June 2002 to build and run a securities lending program, which is now one of the largest in the world, with more than $150 billion worth of securities on loan. He was initially appointed global co-head with regional management responsibility for Europe, the Middle East and Asia and was based in London. He assumed the sole leadership role in June 2005, and his operation now stands at some 70 employees in New York, London and Frankfurt. Before joining Dresdner, Smollen served as head of securities lending for Europe, Asia and the Middle East at Deutsche Bank.